The Last Goose of Fall of the Vermilon River. A Post to World Bird Wednesday. 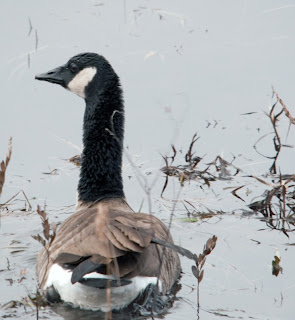 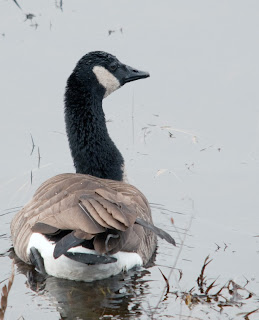 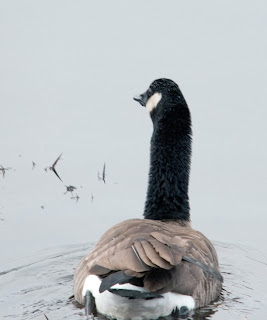 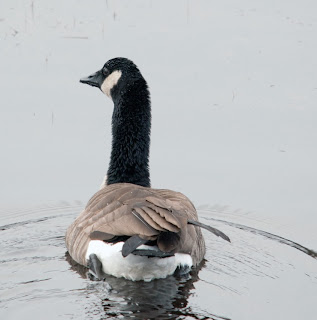 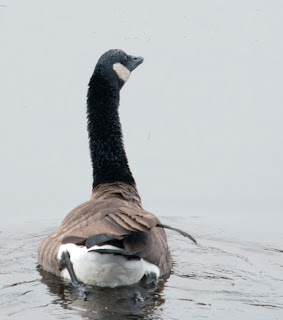 While hiking out the east track in late November, I startled this fellow hiding at the base of the elevated track in the south pond. He was not at all happy with my intrusion and I was treated to a rather loud series of honks, which echoed around the pond. But I did get some good photos.
Just an aside; I shoot at least every second day and this tends to build up a back log of memory cards which sometimes makes me feel as if I'm back in school and have not completed my assignments on time. That's why I post summer or fall scenes in the middle or at the tail end of winter. In addition, I shoot a series of photos so I don't have many individual shots, and I sometimes post more than one post with the same bird, animal or scene. In addition I'm now taking photos of landscapes, skies etc.; so my interests are expanding. This usually means I'm immersed in books dealing with the subject. And it places more pressure on me to process the memory cards. Just a truant schoolboy, I simply grab Boom and we go out more often filling up more cards.
Canada Geese have grown to become a nuisance bird in some areas but here in Boom's and  my forest they're still wild. Also negative aspects about an animal/bird tend to be handed on and most times lack any validity, so I find it interesting to use the web to find out information or scientific up dates.
Here are some facts about Canada Geese:
1)The V they migrate in means the followers can ride the slipstream of the leaders. It also makes for ease of communication, and they do communicate having some 13 different sounds.
2) They mate for life and the goslings remain with their parents for 1 year. The V is usually then made up of families of Geese and can fly up to 1000 km in a day.
3) Males and females are identical in looks.

Here's one more fact. In Canada, we have a public radio network which broadcasts some junk usually the local stuff, but on the national level it's quite good. It runs a program called Quirks and Quarks on Saturday, which is a science update and the host interviews research scientists from around the world. It updates old crocks like me on what's happening. This Saturday he interviewed a climatologist whose team had built a computer model of global warming. The model indicates that even if we can slow carbon emissions, the effect of the current and past years will cause global warming well into 3000. I know there will be detractors but even if it's wrong by + or - 10% the normal error factor, the news is scary, and I'm ashamed to hand on an earth so contaminated to future generations. You can hear the radio program @ www. cbc.ca. Then click on radio and click on Quirks and Quarks to get the show index.

A Post to World Bird Wednesday @ http://pineriverreview.blogspot.com/
Posted by Unknown at 8:38 AM