Strange Skies,Birds,Water Flowers and Red Squirrels of the Vermilon River.

These skies along with the weather have promised much needed rain. We desperately need it to the NW where forest fires are ranging and evacuations are under way. But the skies build up and then dissipate with maybe some thunder and lightening, but very little rain.

The wetlands are lower, but still filled with life as these Lilly photos show.

I put this shot in because it shows the white and yellow lilies together. Despite the lack of rain the forest is still active and fecund, an encouraging state for the birds and animals.

Some Birds of the Vermilon River. A Post to WBW.

I was initially going to call this post "favourites of mine", but I soon realized that all the animals or birds that I see become favourites of mine. I suppose I glory in nature. I was also going to call it " Sparrows of the Vermilon", but I hold that one until the wild sunflowers, smaller than the domestic variety, in my garden go to seed. They're growing now and will soon be ready. When they're ready, I bait the whole area with seeds and see what shows up. Last year I got a great collection of sparrows, and I hope it works again this year. So that explains my current title.

Having said that here is a selection of sparrows.

The Dark-eyed Junco should be with the sparrows as he is actually a sparrow. They've left me now and moved further north to the boreal forest.
As I said earlier I have seen more Yellow-rumped Warblers this year, and this fellow is perservering in a wind storm, singing nevertheless.

I never tire of the Robin who wakes Boom & I in the morning. I think this fellow looks especially majestic.

The Buffleheads below are new to me. They're named "Bufflehead" Because the male's head is reminiscent of a buffalo head.


I put this post together in the new dashboard format that Blogger/Google is so proud of. It then disappears and I have to go to the old format, post a blank, and call up this post and delete the blank. Isn't Google a marvel??

Scenes, Birds , Flowers, Turtles and Creatures of the Vermilon River. A Post to MWT.

This post is a collection of images. With the heat and some personal things to do, I haven't been getting as far, but I have been out. The first shots are of the river islands, and its rock outcroppings. You can see from photo 2 that everything is not perfect in our paradise either. See the name on the rock in the forefront. I normally remove any graffiti which mar the rocks, but left them this time for you to see.

The turtle is from another wetland, actually north of Mystic Lake as are the water lilies and the water weed.

I am always intrigued  by White-throated Sparrows as they make me work to get the shot, and when I do it always look like I paid them to pose. These shots are from the woods directly behind me, about a 3 minute walk.


The Male Hairy Woodpecker is visiting my feeders again. I'm pretty certain this is Huegy the crow as the shot is from the back woods also and he has just finished calling. The song Sparrow is from the same woods.


The day lilies are from my garden and seem early this year. I'm pretty certain that Louise can identify them all.

Of course, I ended with a photo of this guy.

A Post to My World Tuesday @ http://showyourworld.blogspot.com/
Posted by Unknown at 12:47 PM 30 comments:

Views of The Vermilon River. A Post to SWF

What the heck does a sky like this mean- disaster maybe? Then it lightened so I went over to the river trail on a hot, sultry, soggy hike. But I made it home before the big rain.


The day was gray, but the forest is still pretty lush. And before you ask; you can canoe or kayak safely to the north for a couple of hundred miles, and further if you want. The river has receded with the lack of rain, and looks benign, but it's still pretty cold.


Tiger lilies grow wild along the river bank in the oddest places. 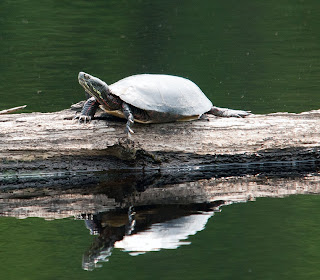 This turtle was sunbathing in a wetland on another day,but I thought you might enjoy seeing him. I never tire of Song Sparrows who are around despite the heat. And of course, a four legged creature, the Red Squirrel. 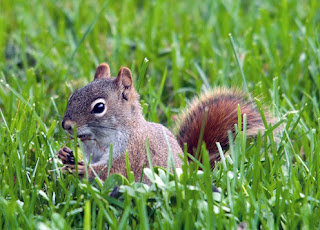 A Post to Sky Watch Friday @http://skyley.blogspot.com/
I'm posting this in rather a rush as blogger/google is messing up again.
Posted by Unknown at 2:48 PM 44 comments: