I think this week's post is both pure whimsy, and actual fact. Blue Jays are probably one of the most dramatically coloured birds of our forest. But who has ever heard of a bald Blue Jay? Apparently, they moult and the moulting occurs along their colour bands. The fellow below in addition to looking like he flew into a fan was also amazingly quiet. Unheard of for a Blue Jay, so maybe he's embarrassed.

Equally strange is the rather bedraggled Northern Flicker. But I think he's a fledgling waiting to come into his own. The resplendent shot was taken about a week later in the same place and I'm certain it's him, looking almost grown up.

I like everyone else wanted to get some shots of Hummingbirds, and to that end I feed them also, but by the time I return home to the feeders I'm out of the camera mood, and hence never get any photos of them. So what do I find up a 50 foot tree perching like a normal bird but a female. Then I discovered that these guys feed on fireweed which is now in seed, but next year...
A Post To WBW @ http://pineriverreview.blogspot.com/

Just a note: My World Tuesday has restarted and I posted to it some beaver and beaver pond shots. If you want to see them, move back one from this post.

The East Track Beaver Pond of the Vermilon River. A Post to MWT.

I hope that " My World" is up and operating as it is one of my favourite posts, because it coincides with the purpose of my blog, which is a photo journal of a small part of the world Boom & I live in. Boom & I don't pretend to be experienced birders, or naturalists, or even wildlife photographers, we just enjoy our woods and count ourselves lucky to live in a wilderness. Several commenter's have said my photos are good if not excellent. First thanks, but really it's all luck and good equipment with probably a good dose of enthusiasm.  Today it's a visit to the east track beaver pond which I've not been to since the spring. It's changed as one of the lodges has been abandoned, I expect for natural reasons. I seem to have got photos of everything, but beaver at this pond. I think the reason being that their work highway is on the other side. But today I was lucky as I caught this fellow in the photos below.

Some of the scenes, which I've included, were just fun to take because it was bright, and the cloud reflections are vivid. The last photo shows early signs of fall. The primary fall colour of this forest is yellow, as we have limited numbers of maple. Any red comes from the Pin Cherry Tress.

The blueberries signal my rest time, and of course they no longer exist. A Post To MWT @ http://showyourworls.blogspot.com/ 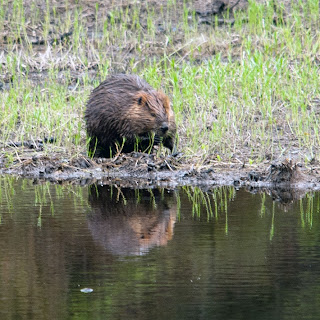 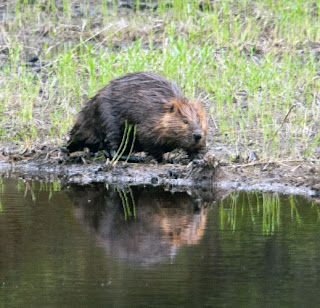 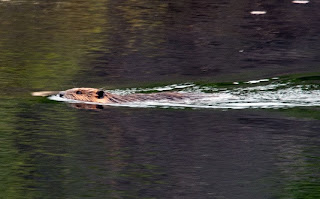 Scenes, Butterflies, Birds and Squirrels of the Vermilon River. A Post to SWF.

The skies as you can see are not especially vivid. They range from overcast to a bit of sun, although we have had rain, which we needed. So for the post today I included some shots that I like from my hikes, and not much copy.

Oven Birds and Female Redstarts of the Vermilon River. A Post to WBW

The Oven Bird photos were taken on the west side of the river, and the Redstarts were photographed near  what I call the big wetland ( see previous post). The Oven Birds were in a mass of pin cherry trees along with the immature Robins and some Cedar Waxwings, as well as some Common Yellow Throats. All were gorging themselves on the pin cherries.

The Oven Bird is a Warbler also, although certainly not as flamboyant as some of his conferrers. They get their name from the nest they build; the entrance is similar to an oven door. My thanks again to NWO Birds for Identifying the Oven Bird, which I had never seen before.


I knew what the female Redstart was as soon as I saw her, and only then because of my previous post on Chestnut-sided Warblers and their variation in plumage. She was one of the ones we had to check out in that post, before we made the final identification. These guys are really hard to photograph in a full canopied forest as they flit around to no end, and then the small flock fly off. The male was shot earlier this year, and is for reference only.

A Post to WBW @ http://pineriverreview.blogspot.com/
Posted by Unknown at 6:31 AM 28 comments:

More Hiking on the West Side of the Vermilon River. A Post to MWT.

Today we're hiking on the abandoned RR line on the west side of the river to the rapids. I put the scenes in a sort of order to give you the feel that you're with me. The river is at its widest in the area before the rapids, and feeds both wetlands, and a little area ( first photo) that appears like a stream in a rain forest.The RR line is raised, so we're above the water.

Photo 3 is the wetlands on my right side as we head to the rapids. Photo #4 shows the river as it winds around one of the lower islands. The main current would be on the side away from us. Photo 5 shows the sudden narrowing and then the rapids. The river looks bucolic because the water is low due to lack of rain. The last time we hiked the rapids the water was high, and I said that it would be better to stay away from the the far side of the island, as the current would likely sweep you into the chute between the bridge abutments. Now you could paddle to the far side, and portage over the bridge to avoid the chute.


The Swallowtails are starting to show summer wear. All of the birds,except the Yellow-rumped, were shot just before the wetland in a group of pin cherry trees, where they were feeding. An Oven Bird is a warbler that gets its name from the style of nest it builds. I had to chase the Yellow-rumped around the tree to get him.

I saw bear dung on the trail, which was blue in colour and fresh. There are no blueberries on this trail. So she/he swims the river and crosses here. When I was coming back, there was fresh dung and pin cherries spilled on the trail. Bears love pin cherries too. Clearly she hid out on me, and headed out when she heard me returning. So no bear photos.

A Post to MWT @ http://showyourworld.blogspot.com/
Posted by Unknown at 3:39 PM 6 comments: