A Tour of The West Side, Led By Broken Beak of The Vermilon River. 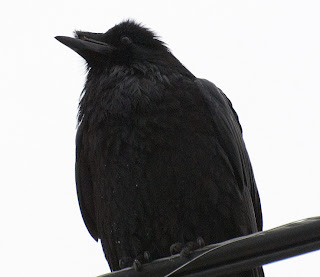 If you follow this blog at all you've heard me say that the west side of the River is Raven country. Now, Ravens are magical birds in the mythology of many people. The story I love the most is the Viking one that has two Ravens sit at the shoulders of Oden, king of the gods, to dispense wisdom. Although they're tricksters, so you must be careful in the interpretation of their advice. One is called Huegin, and this is Huegin's descendant, Huegin" Broken Beak" clan warlord, and chief of the Vermilon  Ravens. 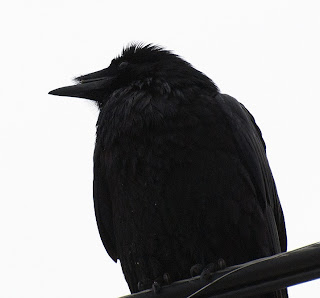 Broken Beak will lead our tour, and fortunate we are to have him as both a physical, and a spiritual guide, for he and his clan of six other Ravens will summon up some awe inspiring sights for us. Read the copy and click the photos to enlarge and enjoy the slide show. 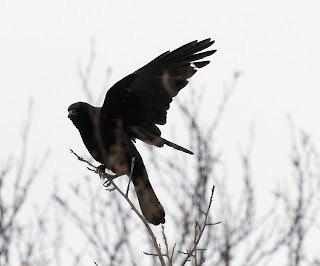 So let's go as this younger member of the Clan is eager to get on the way. 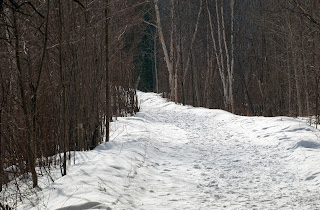 This is the trail, but deeper in the black spruce forest than you've seen before. The day promised to  be fair, but was only intermittently so. You can see the light on the trail. This is a long post so I'll use captions where I can. But I wanted to add the White-breasted Nuthatches and the Bohemian Waxwings were of course a favour from Broken Beak. 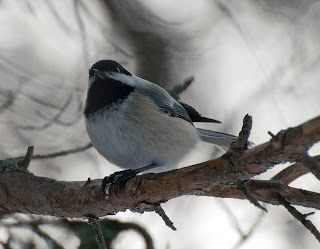 Shooting in the thick black spruce trees adds a light of its own in the background, which I especially like. 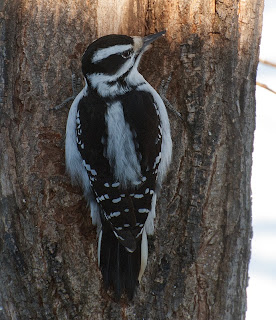 I put this female Hairy Woodpecker here in the sequence, so you could see the difference with the Downy's below. Her beak is bigger; she's bigger, and  there are no black lines on her white tail feathers. Great that we saw both. 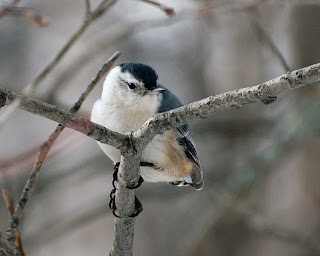 This was really a stoke of luck as I have been looking for the White-breasted Nuthatches for some time. They're usually hanging upside down on a tree trunk,so are hard to shoot. There were about five of them, and they posed which is also unlike them. 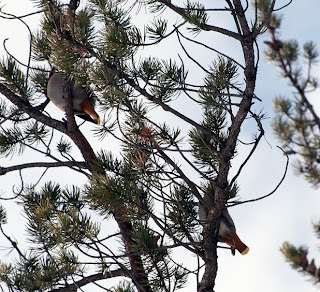 This was a real surprise as I couldn't get close to this tree, but look at the red under tails on these birds. They're Bohemian Waxwings. We're fortunate to have both Cedar and the Bohemian variety. There still must be some berries in the undergrowth. 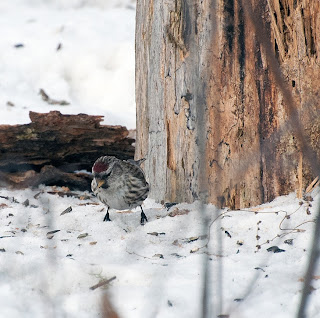 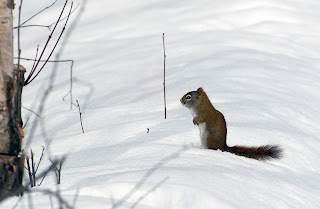 I wasn't sure if we would see any squirrels, although we could hear them. But true to his word Broken Beak got them out. 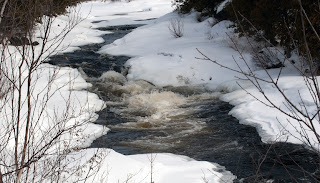 I was worried that if the sun was too strong it would degrade the trail and we wouldn't get to the rapids. But here we are. The River never totally freezes. The ice on the slower parts is breaking up now, and soon will be on the feeder rivers. Then the rapids will be in a full spring rage. 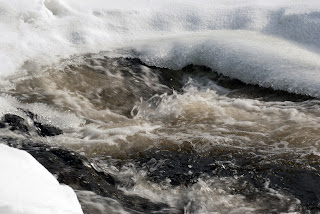 A post to MWT@ http://ourworldtuesdaymeme.blogspot.com/  and WBW @ http://pineriverreview.blogspot.com/  I hope you enjoyed participating in a Viking Saga, and if you did you are appointed an honourary member of the Raven Clan.
Posted by Unknown at 4:41 AM 56 comments:

Black Spruce Of The Vermilon River. A Post To SWF 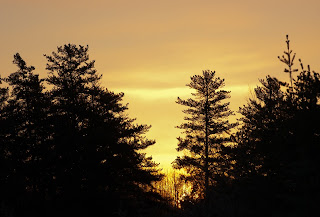 Weatherwise, we're in the spring struggle with winter. These photos were the start of a second bright day, but the temperature was low around -18C until the sun warmed the air. Photo two shows the sun higher seemingly setting the trees on fire. I'd suggest you click on the pictures to enlarge and watch the slide show after reading the copy. 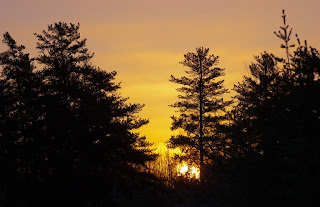 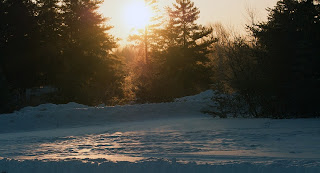 And this photo shows the reflection on the snow. 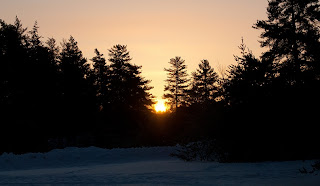 But this post isn't really about a beautiful sunrise, it's about the trees outlined by the sun, the Black Spruce, a quintessential Boreal forest tree. And one which is at risk with the stress placed by global warming on the Boreal forest; the additional stress of the tar sands and the daming of rivers for hydro-electric purposes in Eastern Canada.  They're a slow growth spruce that is attracted to inhospitable land, such as wetlands, or the rock of the Canadian shield. They grow to about 20 metres, say sixty plus feet, and have a shallow root ball. They generate pollen cones which are dark red, and small seed cones which are purplish in colour.

That fact, i.e. they generate male and female cones, probably accounts for their proliferation. Boom and I automatically head for any stand of black spruce as they harbour all forms of wildlife. They provide shelter in their thick branches seen opposite. They provide seeds in the winter, and harbour insects in the summer for birds, which is why we see so many species who frequent the area as their breeding grounds. Similarly, they provide seeds to the Red Squirrels, who chew off the end buds trimming the branches, and extend the habitate of the tree by storing seeds in buried middens, which they then forget about. They in turn provide food for the foxes. The high birth rate of the squirrels, twice a year, ensures their survival, and attracts even larger predators. In fact, spot a Black Spruce and you've located an eco-system that even fosters the larger creatures such as wolves or moose. 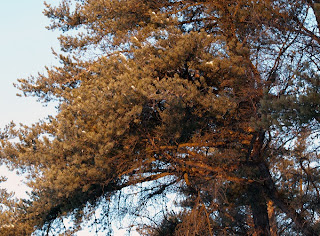 Black Spruce are the first tree in after a wild fire as fireweed is the first plant; initiating the regeneration. Then a die off comes by fire or naturally and they're supplemented by aspen and paper birch, creating an even richer food source. 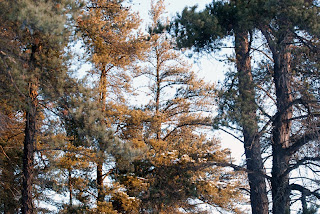 The centre tree in this group is likely dying off. If you look closely you can see the cones in most of the branch pictures. I don't normally use the Latin names, because it seems pretentious for an amateur to use them, but it is Picea Mariana. Mariana means of Maryland, A U.S. state where Black Spruce does not exist. Isn't there some thing pathic about that? 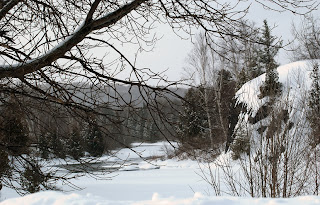 On your right on the rock outcropping, which is the west bank of the River, is a Black Spruce. Now is that an inhospitable site for a tree?

This is the abandoned railway track on the west side of the River. It is a stand of Black Spruce, which you can see in the distance as the trail turns. On your right, and left are aspen. In front of the aspen on the left side you can see the birch. The River bank which is low and marshy is to your left. This stretch is loaded with wildlife, because it provides food, water and shelter. And a food chain of critters large and small. 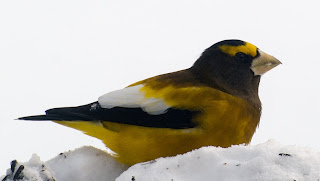 The Black Spruce is not as susceptible to spruce budworm as the White Spruce, but repeated infestation will kill it. The Evening Grosbeaks shown here are natural predators in the summer of the worm. That's a male opposite. Most of the birds and all of the squirrels were shot in this stand of Black Spruce. The tree is harvested for pulp and paper and framing material for houses. The lesson is: if you're in the Boreal head for the Black Spruce trees taking your camera with you.. 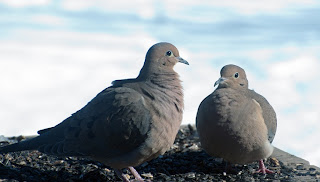 Our two Mourning Doves again, who I think were just preening each other earlier. After all this is a family blog. A Post to SWF @ http://skyley.blogspot.com/ Camera Critters @ http://camera-critters.blogspot.com/ Scenic Sunday @ http://scenicsunday.blogspot.com/ All of the material is from Wikipedia or eHow.com. Just goggle Black Spruce. And Glen Blouin, An Eclectic Guide To Trees: east of the rockies, The Boston Mills Press. 2001.
Posted by Unknown at 11:45 AM 51 comments: