I think this is going to be a strange post, not because of the photos, but because of Blogger/Google. I've had to enter the post through a microsoft browser, not Google Chrome as it will not accept the photos on the blog site using chrome. The photos are also not loading correctly, and I'm having to do them twice. So I'll move forward with captions and cope as best as possible.
REMEMBER CLICK THE PHOTOS TO VIEW THE SLIDESHOW. 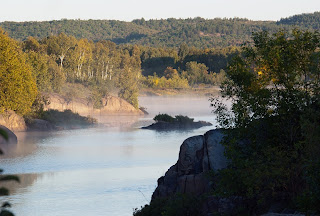 At the right the River through a rock face looking north. You'll see the trees starting to change. The Vermilon Forest is a gold forest in the fall, unlike southern forests which have more maple and oak, and are red and gold. Our red comes from a few maples, the pin cherry trees, and the blueberry plants which cover the the clearings. 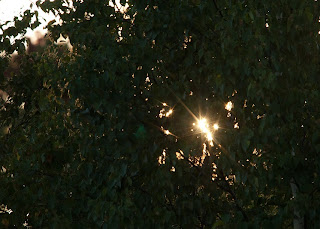 The sun filtering through the leaves, and making highlights. 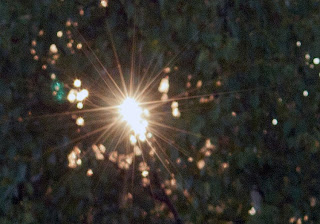 The same, but I couldn't make up my mind which I liked. 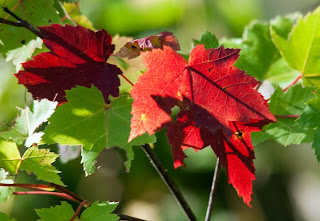 A selection of red maple leaves. 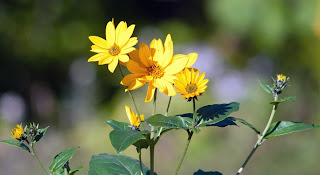 The whole forest is alive in cleared areas with wild sunflowers. They're smaller then the domestic ones, and grow taller. 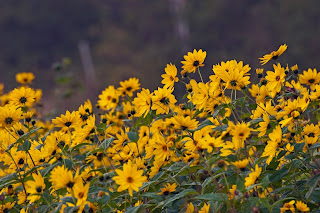 This is a clump growing on the bank of a wetland. 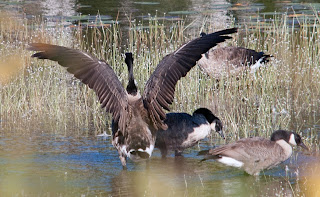 I found a little trail which allowed me to look in on all these geese in a River wetland. They're all in moult. Imagine the warm down vests. If you look closely you can see the feathers in the water. 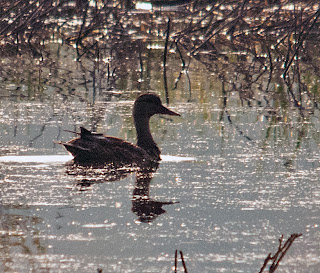 These duck photos were taken at the East Track beaver pond in the mist. 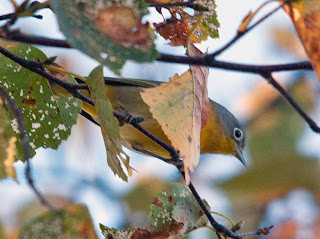 This is a series of Nashville Warblers 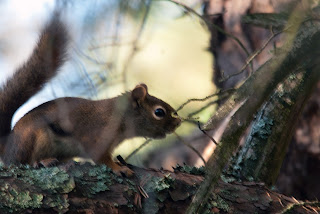 This Red Squirrel watched me, until he relented and posed for a shot. A post to Sky Warch Friday, and Camera Critters. Click to go directly.
Posted by Unknown at 9:49 AM 52 comments:

We've moved into more seasonable weather with a return to humidity, and high temperatures. This means I'm out early in the morning. Everything is shrouded in mist especially the River and wetlands, which makes for great fun. Although there are some more shots of the Leucistic purpler finch, there is no heavy text in this post, except perhaps for the photos of the Red-winged Blackbirds in their evolution to maturity. The first scenes are of the upper River. 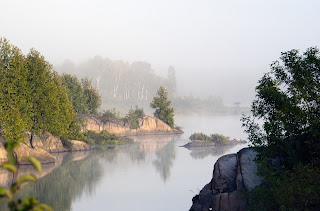 So with that in mind you can view the slideshow with ease.

SIMPLY CLICK ANY PHOTO TO ENLARGE AND WATCH THE SLIDESHOW.

A post to Our World Tuesday, I'd-rather-B-Birdin' and Wild Bird Wednesday. Click any one to be redirected. 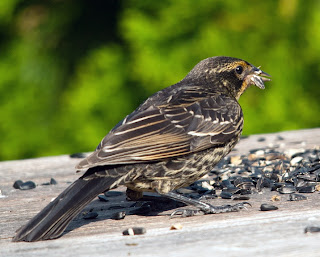 I had read on another site that any gathering of blackbirds is attended by many types. In this swarm there were a fair number of Red-winged Blackbirds. What I didn't realize was that the immatures resemble the female, and gradually moult to move into their male plumage. So all I know is this is a photo of an immature Red-winged Blackbird, gender unknown. 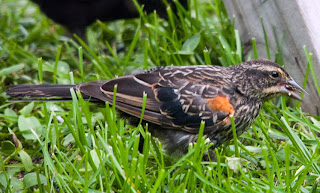 Now it gets easier as the immature has developed an orange patch on his wing. 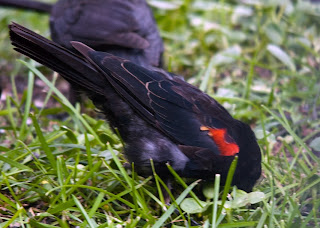 In this photo he's well on his way to a fully developed epalette, but his wings still have the stripes of immaturity. 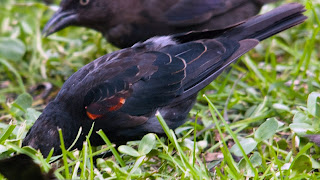 The epalette on this one is not so developed. Nature never fails to amaze me. 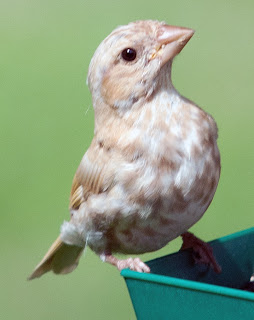 These photos are more shots of the Leucistic Purple Finch. For an explanation see the previous post. 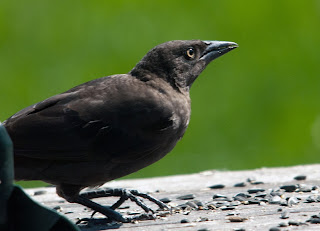 This is a female Grackle. If you look closely, her leg is deformed. She is able to perch on a branch, and move about. She is accepted by her flock, as is the Leucistic Purple Finch accepted by hers. 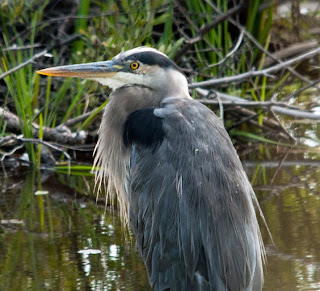 This is the Great Blue Heron series. I photographed him on the west side of the River.