A Bit of Whimsy At The Vermilon River.

If nothing else the weather has been consistent. Cool, and cloudy in the mornings, with intermittent sun, and fog. Then, rain in the afternoon and night. The lighting changes with every bend in the trail, giving an amateur such as myself, an opportunity to play with some artsy shots. Hence the title of the post. The initial scenes are all of the River shrouded in mist.

The post is full of photos, so again: CLICK ON ANY PHOTO TO ENLARGE AND VIEW THE SLIDESHOW, ALTHOUGH I SUGGEST YOU READ THE COPY FIRST.

A post to Our World Tuesday, I'd-Rather-B-Birdin', and Wild Bird Wednesday. 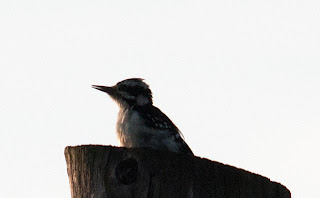 Previously, I had not seen many woodpeckers.This Hairy is making up for that, seeing me off on my hike. The female Hairy below was shot on my feeder and not included in the last post. I need to remind her that the seed she is flinging around costs money. 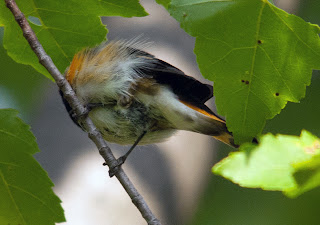 Now the warbler photos begin with this male Redstart. 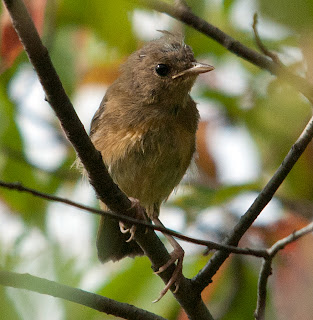 Now this fellow is clearly an immature, but which one? At first I thought it was a Nashville Warbler, But there are no eye rings. On another web site in an almost identical photo, it was identified as an immature Common Yellow-Throat (Warbler). 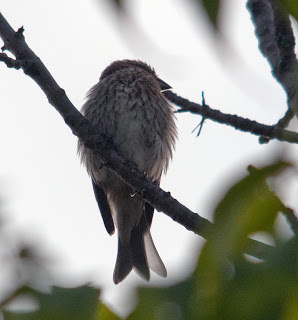 Here we go again, and this one was on the west side of the River with all the other warblers. Notice the brown and white markings, but I think the key is the beak which is a Grosbeak shape. 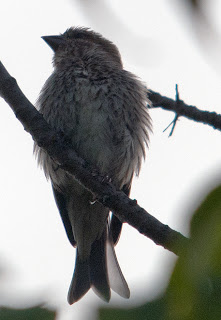 So I enlarged her/him to 100% to see if there were any head markings. I don't think so. 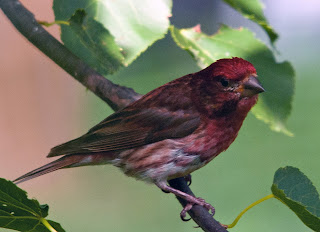 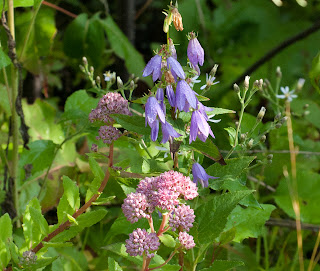 With the arrival of the rain, the forest has rejuvenated itself. Look at the purple and pink together.
Posted by Unknown at 5:42 AM