Some Wildlife Parents and Offspring Of the Vermilon River.

The weather has been fast changing from thunder storms to sunshine and high humidity. My impression from the water level in the wetlands is that very little rain has actually fallen. At best the water level is not dropping further as a result of the rain. This is August now, and the offspring are starting to show, while parents finish off their training. This is a dicey time of year because the non-breeding plumages are showing making identification of birds especially in the warbler category difficult.

The decline in water in the River allowed me to take some different shots because I can get out on the shoals without being washed away, and the humidity results in moody overtones from the early morning mist.

THE POST IS SET UP FOR THE SLIDESHOW, SO CLICK ON ANY PHOTO TO START IT UP. YOU SHOULD READ THE COPY FIRST SO YOU KNOW WHAT'S GOING ON.

A post to I'd Rather Be Birding,Our World Tuesday,and Wild Bird Wednesday. Click on any and you'll move to the meme.

The first scene is of course the sun trying to break through, and the next two, the River looking north, one with the sky in and one without, because I couldn't make up my mind which I liked.. 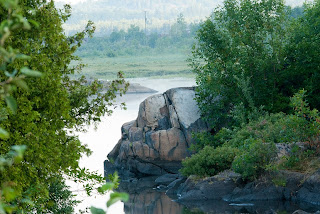 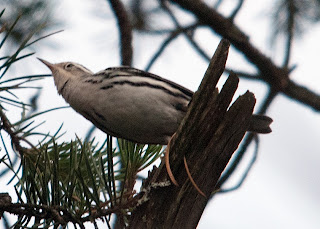 This is an other new warbler find. They're Black and White Warblers. 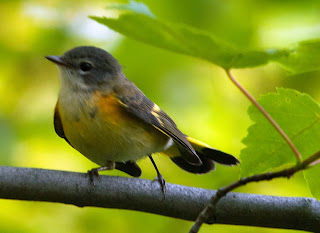 The female Redstart is the hardest to photograph as she is even more elusive than the male. She's an outstanding looker. 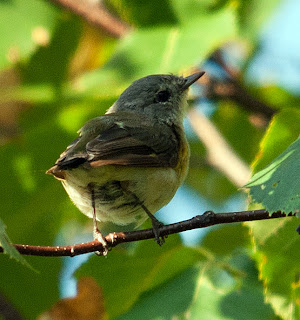 Having said that about the female, here's an immature female Redstart. 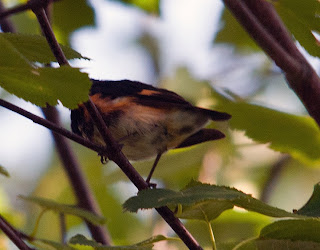 All these photos were shot on the west side of the River in dense woods with stands of birch and aspen. You'll shortly see how difficult it gets when they're in a stand of black spruce. 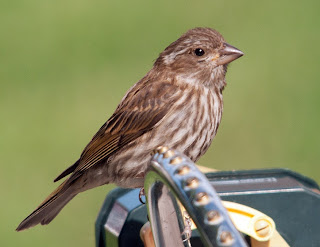 I very seldom  add any photos from the feeders, but about ten purple finch have moved in.The little group is made up of a male, some females and some immatures. Opposite is an immature. 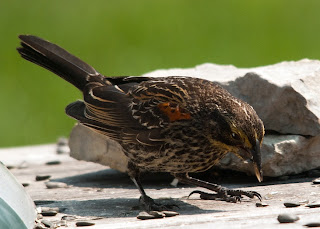 A flock of blackbirds showed up yesterday at the feeders. In the group was this male Red-winged Blackbird. See the parch of red/orange on his shoulder. It's the first time that I've seen one this young.