I used survival in the headline so I could dispose of ,right away in fact, all the comments on Boomer's and my bravery at going out in this cold. First, Boomer and the birds shown are by natural selection built for it. Nature gave me a brain, so I dress for it, and if the going is tough, we just go more, but not as far. There's no need to translate from C to F because at these temperatures, they're the same. The pink skies were all taken after the post of last week when we had all sorts of different weather in a short span of time including a taste of spring. But true to the red sky adage, nature laid in an arctic air mass that sat for most of the week. Temperatures dropped to the -40's in the day, and the-50's at night. At one time,(in my life time), these temperatures would have been normal for here over January, February, March with some warming towards mid or the end of April. 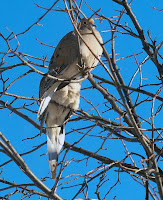 Boom and I woke to a foggy sky, but none like most of you have experienced. The fog photos are gathered below in one area and show the sun rising. At these temperatures,the cold is wringing the moisture out of the air,but freezing the droplets instantly.They then fall to the ground as little ice crystals. Normally in the winter my parka collar is coated in frost from my breath, just as Boomer's muzzle is frosted. On these walks my collar was coated, but so was my parka overall with tiny frozen ice crystals; so, was Boom's guard fur. You can feel the cold drying your skin and lips, which gives you a  tingling feeling. But you have to be careful of exposed skin as the tingling can turn to a numb feeling, followed by a small white dot, a sign of frostbite. 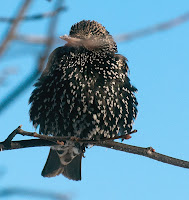 If the conditions were stormy, the storm would be less intense because the air is dry. The reverse heavily, saturated air, would intensify the storm conditions. Dave Phillips, a federal Government climatologist  reported on the CBC the other day that the average temperature used here for comparison purposes, was being readjusted up by 3.4 degrees C. This average temperature increase means more evaporation, or a more humid air. Over large bodies of water, oceans, or even the Great lakes, storms will intensify, and you can therefore expect to see more violent storms like the one that hit New York and New Jersey worldwide. But other conditions occur also. For instance, with warming temperatures water in the Boreal forest evaporates faster setting up the enabling conditions for wildfire. So scientists here in Canada have estimated 50 percent of the Boreal forest will have been burnt over by 2075. 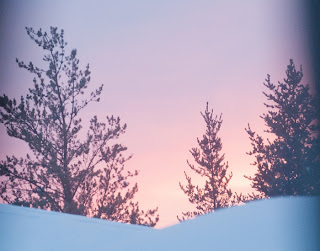 Please don't comment about what bad people we are. Do something about it!!! Are you going to feel it.? You bet. Here's just a few areas: rising  insurance rates, higher disaster costs to Governments already broke ,higher building costs to meet changing conditions, rising cost of water,now a more rare commodity,and higher food costs as parts of the continent dry up to name just a few ways.

A post to I'd Rather Be Birdin', Our World Tuesday, WBW. Click any photo to see the slideshow. 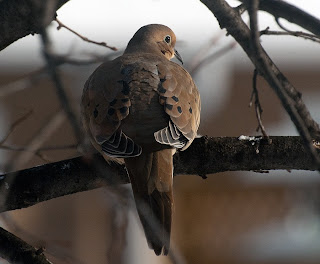 Just a note to Sallie: I used the word Convocation because the doves in the previous post looked so formidable. It's not the correct collective noun as far as I know. 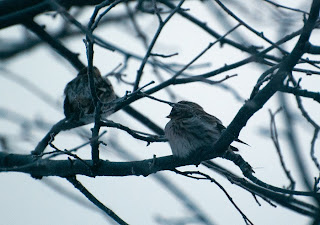 These Redpolls are in the foggy -40 weather, but remember they're arctic birds. So it's a piece of cake for them . 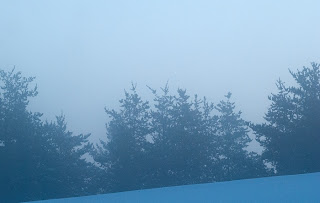 This is the fog we awoke to. In the next sequences you'll see the sun rise giving an orange and then a yellow tinge to the sky. 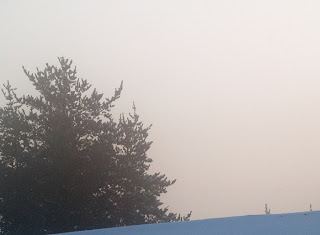 Winter,Spring, and Winter Again At The Vermilon River.

As the title implies,we had all the seasons except summer.The spring was accompanied by rain and freezing rain,and the winter by snow and more snow.Of course temperatures bounced well above zero to -35C, a tad brisk.The skies were overcast and then sunny, but you'll notice that in the photos. The joy is we still made it into the woods. I realize Boom and I are blessed beyond thousands, but I just can't imagine being inside all the time. 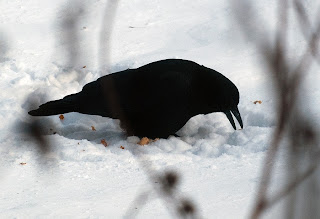 There are no messages this week, so click any photo and enjoy the slideshow.

A post to: I'd Rather be Birdin, Our World Tuesday, and WBW.