A New Trail, Or More Exciting Adventures At The Vermilon River. .

Up to the eyebrows with cabin fever, and tired of incessant rain, Boom and I decided to cross the ridge and take a chance on avoiding a storm. The rainy duration has been long, and substantial, even washing out highways to the west of us, and forcing evacuations of aboriginal reserves in the Wawa area.The idea was to pick up a trail we had never used before and enter the east track beaver pond from the reverse side.

Once under way the sky lightened a little, but that as it turned out, was a tease.

A post to:I'd Rather Be Bird'n, Our World Tuesday, and Wild Bird Wednesday. 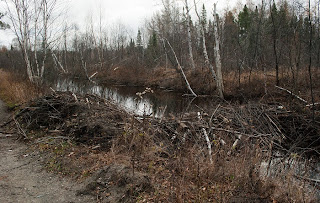 After a long hike we picked up the trail to the beaver pond, but were soon thwarted by nature and the beavers.

The beaver pond empties by a circuitous route into further wetlands, and the River,but the beaver had damed the tributary. With the recent rains, the whole trail was flooded. By moving off trail we got a little way, but the remaining ten feet were impossible, because of depth. The dam is new. I thought you might like to see how clever they are. The dam is constructed of mud and branches, and buttressed on both sides. The dam is constructed to release water under flood conditions. 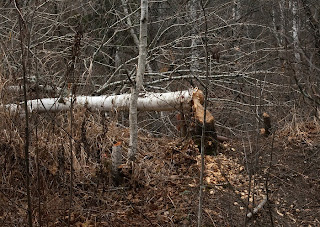 Construction material and food is right at hand. 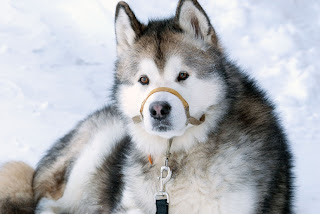 Several people asked me how Boomer is in the forest. Malamutes,Boomer in particular are silent dogs. He's feral himself, and after going alert, only grunts to let me know something is there. Canines including wild ones have three senses. Smell is the most active, some 10,000 times more active than mine, followed by hearing, again more acute than mine. Eyesight is the least effective, but is more sensitive to movement than mine. We see instead planes and angles and depth. To see the way canines see, try using your peripheral vision and you'll notice movement. CBC ran a series of programs on new research just recently completed on dogs.
He also obeys commands like stay, but the most effective is steady. That means stay, and watch me. As well the haltie leash acts like a rein to silently signal direction. So all in all, he'a no slouch in the woods.

Another Face Of The Vermilon River Forest, or a Walk in the Tundra.

So far in my scenic, or landscape photos I've concentrated on wetlands and the River itself. Shooting landscapes involves angle, planes, and interesting sites such as rock islands or rapids, as well as colour. The River or wetlands is filled with interesting sites which facilitates the process and it was here that I, therefore, cut my my teeth. But the Vermilon Forest is a transition forest between the St.Lawrence-Great lakes Forest, and the Boreal, and offers even more photo opportunities.

Boomer's move out of the lethargy of the hot summer, and our finding of the new trail over the ridge behind our apartment gives us a perfect opportunity to give you a view of a Boreal phenomena-the Tundra, Taiga, bog or fen, whatever you want to call it. The ridge in these photos, has the usual selection of trees, birch aspen and spruce, pine as well as some black spruce, which I have written about earlier. We'll be moving into something very different.As interesting as the sky is, the sky is overcast,and we're going into a thick forest that surrounds the actual tundra. 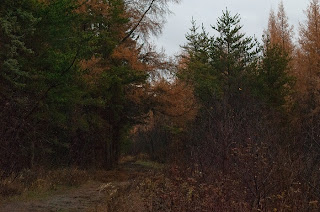 Once we clear the ridge, the forest changes to black spruce and tamarack. I've written of black spruce before. Tamarack is not an evergreen,although it looks like one. It sheds its needles in the fall which first turn an orange brown. As well it prefers, like the black spruce, damp ground. In fact everything is damp here and murky with or without light.It, the Tamarack, is a Boreal tree. 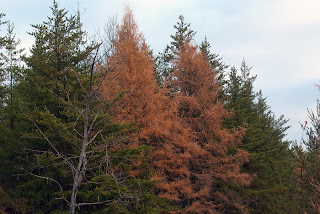 Tamaracks and spruce against the sky.There is a creek that runs along the trail. The forest is almost impassable because the spruce is gnarly and the forest brush is thick. So if we go in it I generally get hung up. Boomer is much more agile,as is the wildlife. 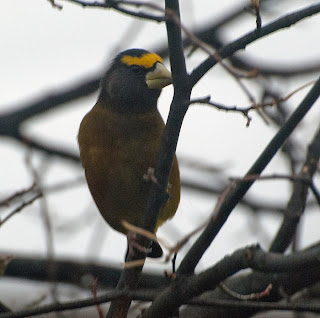 Perhaps Boom, and I have been in the forest too long. We don't measure the change of seasons by the arrival of snow, or the leaf colours, rather we measure it by the wildlife, both four legged and the birds. The warblers are long gone. The junco's, white crown sparrows, and the white-throat's have left. The Pine Siskens have arrived in force as have the Evening Grosbeaks. Next it will be the Redpolls, Pine Grosbeaks, Bohemian Waxwings, and the Cross-bills, all Boreal birds looking for food. They are all heavy duty feeders, and will ground feed. As long as the food lasts, they'll stay and brighten our winter.

Similarly the four legged, non-hibernating critters will adapt to their winter mode.

Above is a Male Evening Grosbeak.