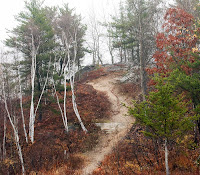 It's been a while since I've posted a series that was not about a hike. This one deals with primarily the Ruffled Grouse, but some other birds as well; some in fact that are fairly rare, and even a new sighting for me.

Boom and I were hiking the ridge directly behind us. As I mentioned earlier this has been made possible by a new trail. The photo opposite shows one of the old trails, way too rugged for me.

We used this trail (opposite photo) in past years. Boom would pull me up the rock, but he's ten now and a little old for that. We found a trail off to the side which is easier for us.

A post to: I'd Rather Be Birdin',Our World Tuesday, and Wild Bird Wednesday. Click any to redirect. REMEMBER CLICK ANY PHOTO TO ENLARGE AND WATCH THE SLIDE SHOW, BUT I SUGGEST YOU READ THE COPY. 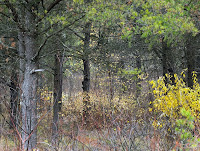 The trails in this area run through stands of black spruce shown opposite so if you leave the trail, you're in thick brush, and gnarly grasping tree limbs. Boom handles it well, but with a backpack and camera  I can get hung up fairly easily, and that happened repeatedly pursuing the grouse. 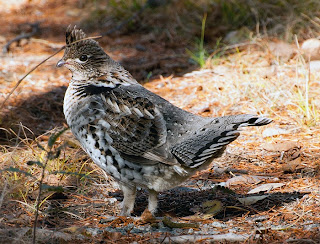 The English language is flexible and sometimes mystifying. Locally the Ruffled Grouse is called a "partridge", but it is not.

There is a grey partridge here but it is an import not a native.

The Ruffled Grouse comes in two morphs, red and grey. All these ones are red morphs, I think. 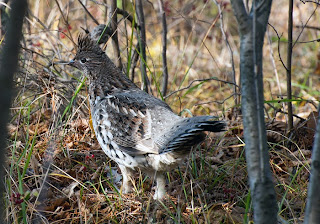 Their camouflage is excellent as you can see from the photos. He's standing in the trail and until you're close, he's hard to see. By the time you react, he's taken off in an explosion of sound which will startle you. You'll also find him on tree branches as you'll see in the photos. 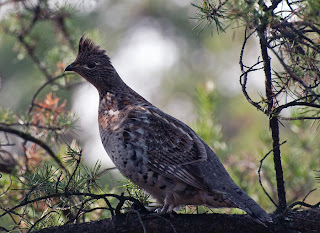 The male is territorial, and drums to attract females.

They are active in the winter using scales on their toes as a type of snowshoe.

All this information is courtesy of Cornell Labs, Wikipedia and Nature North. 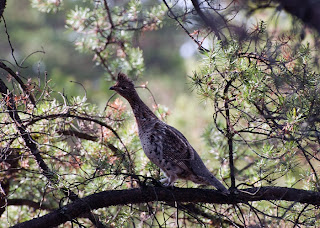 Here he is in the tree. We went into the brush after him. Boom is lying down quietly, and I'm tangled in branches and brush on the forest floor. 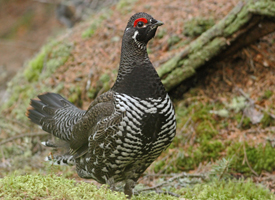 The Ruffled Grouse is only one of the resident grouse. The other is the Spruce Grouse. Opposite is the male and below the female. Courtesy of Cornell Labs.

They're here, but so far we've not managed to get any keeper photos. Shooting in thick forest is hard.

I've been watching for Rusty Blackbirds,and caught this one on the west side of the River. They're under stress from the tar sands, and water hydro development in eastern Canada in the Boreal Forest. 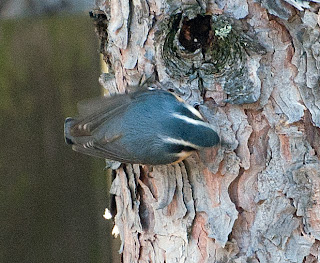 Boom and I caught this Rose-breasted Nuthatch. 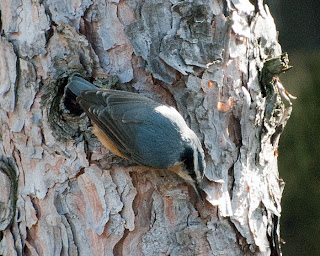 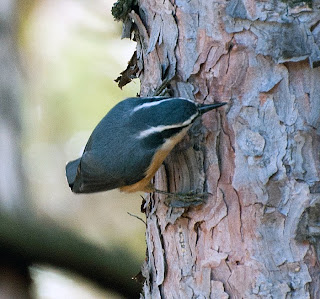 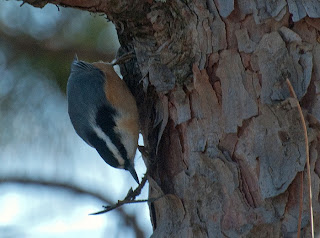 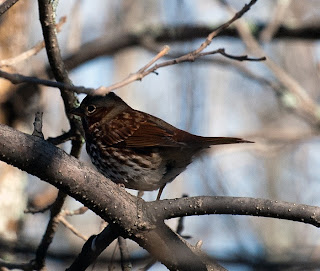 This sparrow is a first for me. I'm pretty certain it's a fox sparrow.