A Common Snipe, Birds, Otters At Play, and Scenes of the Vermilon River.

I fear Indian Summer is over with a temperature drop to -3 C in the morning and a rise in the afternoon to 7 C. We're also experiencing a cold  rain, which is very close to snow. The photo opposite was taken on Boom's pre-sunrise walk. No wonder we scare people who suddenly see us emerging from the fog. Good thing there are no people.

Most of the photos in this post were taken on days when Indian Summer was in full swing, as you can see from the shot opposite.

THERE ARE A LOT OF PHOTOS SO CLICK ANY PHOTO TO WATCH THE SLIDE SHOW.

A Post to: I'd-rather-be-birdin', Our World Tuesday and Wild Bird Wednesday. Click on any one to redirect. 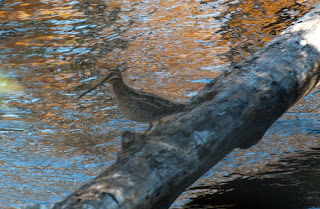 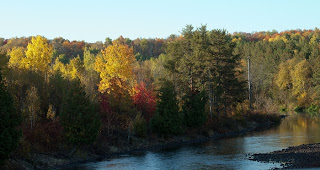 Despite the rain, the leaves are still resplendent. I checked the web for an explanation of the leave colour change. The colours apparently are already in the leaves, but hidden by the green chlorophyll, the chemical which promotes photosynthesis. Once the temperature changes the chlorophyll leaves. The red colour comes from glucose left in the leaves which turns red in the sunlight. The brown in oak leaves is chemical waste. 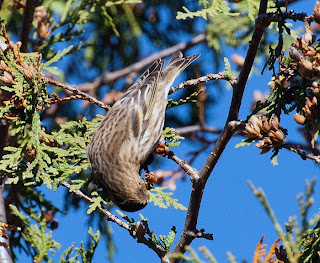 As I said earlier the Pine Siskens signal the arrival of fall. There were about fifty in this flock, and as with all Boreal birds are voracious feeders. 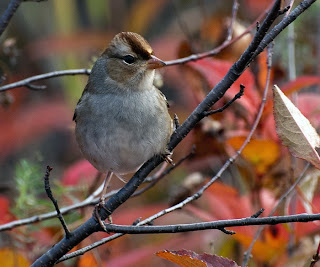 Immature White Crowned Sparrow. Another sign of fall is the arrival of these fellows. They're a larger sparrow and quite spunky. The immature always looks to me like he has a Mohawk cut, which suits his aggressive nature. As with other birds of the Boreal, they feed on the ground and are voracious eaters. 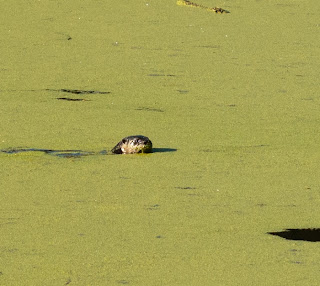 As I explained earlier the Otter were at play. Nothing is more fun to watch then these clowns as they frolic in the wetland. 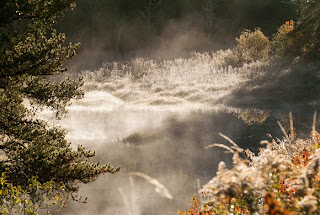 Blogger/Google has been a little better lately in allowing access to sites, but some are still hard to get into. The opposite is a frosty, foggy wetland.


HAPPY THANKSGIVING!!
Posted by Unknown at 6:04 AM