Bohemian Waxwings of the Vermilon River. A Post to WBW.


﻿﻿
﻿
﻿ ﻿﻿  Boom & I are blessed beyond thousands when you figure that we shoot pictures in a wilderness  right outside our door. The birds, animals, insects, and scenery are there for the watching, no looking in some cases required. We don't drive, we walk, no carbon imprint at all. But this was even an easier photo session as these Bohemians turned up outside my apartment front one day to harvest the ornamental crab apple trees at the front of the building.

First a bit of a description difference. The Bohemians have the red rump and the more ornate feather striations if that is the word. Note the difference between photo one and two. The Cedar Waxwing has a yellow rump( under the tail feather, and not shown). The Bohemians are bigger, but who has a tape measure when you're in the woods. Bohemians normally live further north than the Cedars. Cedars restrict themselves to NA, while Bohemians like RedPolls wander the world. There is a Japanese Waxwing, but we don't need to worry about him here.

Both are incredibly social birds flying in large flocks not just in a common search for food, but for fun, play and courting. They prefer coniferous forests, and are voracious feeders mainly on berries, but eat insects also. Bohemians incorporate food into their courting rituals where the male and female will exchange food, as well waxwings will exchange food as part of their playful interaction.
﻿
﻿
﻿
Few birds, whether Cedar or Bohemian, are as attractive, especially with that Mohawk and incredible face mask,and we have both. 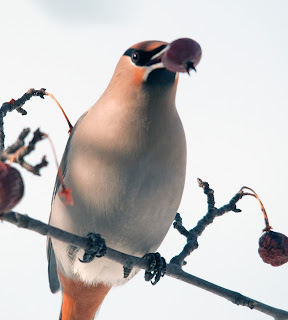 Just A Quick Note: I caught up to a note on a post on my blog about the danger of the Alberta Tar Sands. Statoil, the Norwegian state oil company, is a participant, and is in court this week for removing too much fresh water from the area. Norwegian Grandparents, an organization of 2000 grandparents is running a public apology in the Edmonton newspaper to Canadians on behalf of Norway for being involved in the tar sands. There is a very concerned group in Norway including banks, an insurance investor, and citizens that want Statoil out of the tar sands because of destruction to the boreal forest. You can catch it by googling Norwegian grandparents and the tar sands. Hope you'll take a look, read the other posts and pressure for the shut down of the Tar Sands, because we do not have the technology.
A Post to WBW @ http://pineriverreview.blogspot.com/

A further note: my work screen is showing the format of this blog fine, but the preview which is even missing part of the header, is not so I hope everything is OK.
Posted by Unknown at 7:36 AM