Red Skies In The Morning... At The Vermilon River. 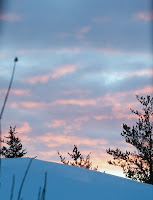 With the big snow storm over, the temperature dropped to the mid teens Celsius, but the winds were from the north reducing the temperature,with the wind chill adjustment, some mornings to the mid or late twenties Celsius. No conversion necessary, it's just damn cold Fahrenheit or Celsius when the wind hits in your face. Boom and I draw the line at -27C with the wind chill factored in. The skies were generally overcast with snow flurries.
The skies depicted here were taken the morning of the 30th, and true to the adage the day was overcast, although there was no snow. The morning temperature was -25 C with the wind chill in, so we got a pretty good walk. 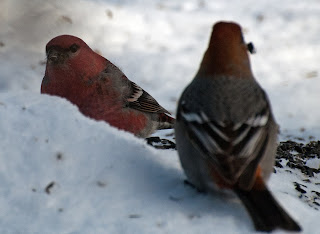 I had mentioned dog sledding in the previous post, and lo and behold, there was an interview with a BBC, or German Over Seas Radio interviewer the next morning with a Laplander ( Finland) about his dogs. Laplanders call their dogs Alaskan Huskies, but they're the same as Boom.
Anyway, there were eleven in his team. He said the dogs reached up to forty kms. per hour, and their range was about 200 km per day, not at top speed of course. He too felt the snow mobile was an interloper,although he has of course two choices of mobility, dogs or reindeer. She, the interviewer, rode in the sled, and remarked on the pungent aroma of eleven dogs on a long run with no pit stops. I'd forgotten about that. 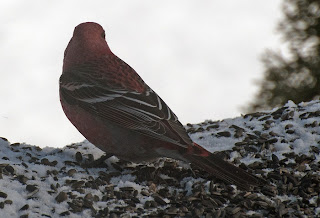 CBC, public radio, in Canada links up with the BBC, or German Radio, or Radio Australia at night. I was pretty certain that the interviewer was not an Aussie from the accent, but a lot of Germans speak English with a Brit. accent, and the German network employs UK announcers. As an aside, one of the Germans that I worked years ago with could switch accents in English from American to an Ox-bridge accent mid sentence. Speaking more than one language is common in Europe and the use of multi languages is becoming more common here in addition to the basic English and French.
. 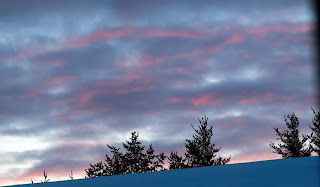 The first two bird photos are Pine Grosbeaks. Opposite another shot of the red sky.

A post to I'd- Rather- Be-Birdin' ,Our World Tuesday, and WBW.

Happy New Year from Boom & I.