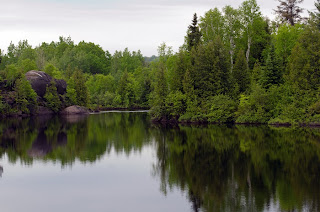 This is a very long post, so I suggest you use the slide show, by clicking any photo. Although there are comments throughout the post that you might want to read. This is a compilation post in that the bear, and the vulture shots were taken at Rockcliff Lake, part of the uninhabited chain (most are uninhabited) that starts with Mystic Lake. But instead of the ridge, I'm on the road which leads to the Aboriginal Reserve where there is a good, licensed restaurant which makes great omelets; a fine finish to a hike ,and a great addition to the wilderness. I'll probably make a video about this area next. Opposite The River flowing south. 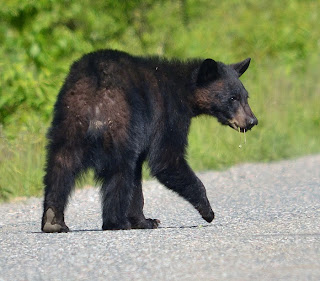 Obviously a Black Bear. Likely a young female her first year alone in the woods ( by size). Males are released later by the mother owing to the threat of full grown males who will kill them over territory infringements. I had to change the lens, and I loss sight of her, not a good move. They can move very fast, and this time of year they're hungry, and cranky as the berries are not out. In fact, those are weeds hanging out of her mouth,so she's eating a lot of grass. Boom would have known exactly where she was, and stepped in if she came our way. He did that once when we walked into a female and her cubs in Town just after my accident. He merely stepped in front of me, flexed his muscle, and showed his teeth. She and the cubs turned,and left. Hard to believe from a dog who was every one's friend. 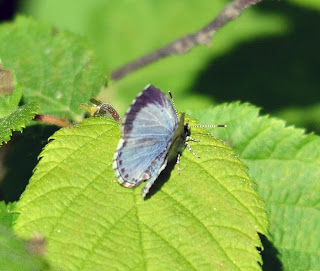 This is a Spring Azure about the side of your finger nail. I was complaining in a previous post about never getting a shot with open wings. 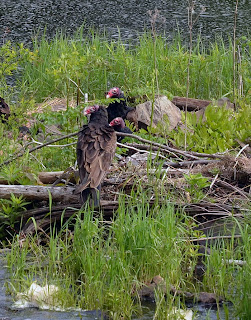 I have no idea what these vultures are up to. I cannot get into that area as it's boggy, and the banks are too steep for me. If that's not enough you have to climb around a water fall, so getting down there is out for me. 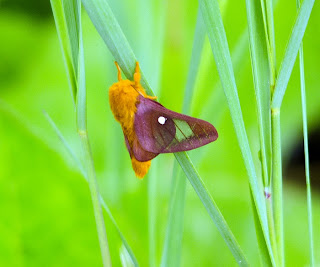 I have no idea what this is other than a really colourful moth. I'll have to do some searching. I couldn't find it exactly, but I'm wondering if it's a clear wing or hummingbird moth in some early stage of development. 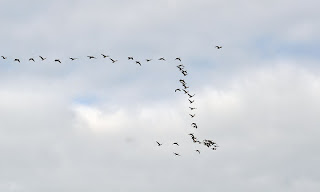 Some Geese have goslings and others are still in huge flocks. I think it is a strange year.


A post to: i'd rather b birdin, Our World Tuesday, and WBW. Below a Red-winged Blackbird.By the way, I'm still thinking of a meme for video's. Feel free to comment.Video 2 I've linked this site to show you what I mean. 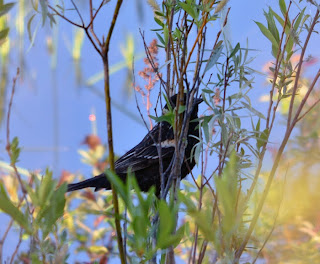