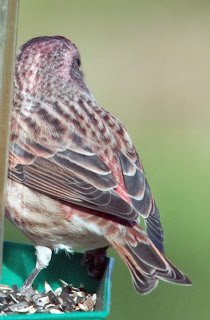 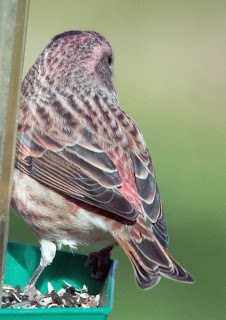 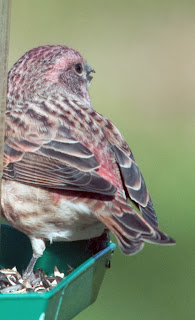 These guys showed up with the purple Finch. I was lucky to get their photos as they're as hard to shoot as Chickadees with the constant flitting around. Also their colouring is a raspberry red as opposed to the purple finch. I think neither the camera nor photoshop likes the raspberry red. The other shots are not as good in their depiction of the raspberry red, so I may not post them. I'll see.

These are the photos that I mixed up with the purple finch in an other post, so here they are now. In that post I gave the following facts:
1) A flock of house finches is called a development of finches.
2)They were imported from the SW US in the 40's and spread from there.
3) That wonderful raspberry red may be yellow because of diet and is called a variant.

A post to Camera Critters @ http://camera-critters.blogspot.com/
Posted by Unknown at 6:44 AM