Still Hiking to Mystic Lake of the Vermilon River. A Post to Sky Watch Friday. 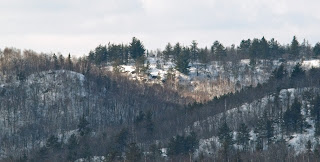 For any of you that are just joining the hike to Mystic Lake, this is by far and away my most rugged hike. We'll take a side trail into these hills along the rim of a cliff. The elevation is about 70 feet; the trail is narrow and the slope will vary from 45 to 60 degrees. SEE THE PREVIOUS POST TO CATCH UP.

Remember this is a wilderness. There are no people. Boom is not with me because it is hunting season, official or otherwise. The hike was made in late November over a two day period, and it is intensely cold, especially on the sunny day.

Hugin, our Raven trail guide will still watch over us.
﻿
﻿
﻿
﻿We left off yesterday about this part of the trail. The climb to this outcropping has been made up a narrow 45-60 degree trail. To step off the trail would be foolish as the incline to my left is steep, and the small valley below may be dead fall. At the upper end of the outcrop of rock, the trail will dogleg at a 90 degree angle. The outcropping is about 12 feet high, so I have no idea what is on the other side, and again there is no place to step off the trail. If Boom were here, he would let me know what is around the trail. Once around the corner we'll cross a flat rock shelve with a few manageable uneven parts. Everyone OK?

﻿﻿﻿﻿﻿
﻿﻿﻿﻿Now we're past the rock shelve which is a great spot for a rest, and we're on the down slope which is a lot more gentle. There is all sorts of water seepage,which has worn out little caves underneath the rock. With ice coverings they tend to look like ice caves.
﻿﻿
﻿﻿ There are all sorts of red fox in the area and this guy has found his own hidey hole.
﻿﻿
﻿﻿Black-capped Chickadees are native to the area and it's common to pick up a couple that will follow along with us.Similarly, the sparrow population is well represented, and I've included two of my favourites, below.
﻿
﻿
﻿
﻿
﻿
﻿

﻿﻿
﻿﻿I included some examples of the fauna to give you some idea of the rich colours, and bounty of the forest in season. Fireweed gets its name from its quick growth after a forest fire to begin the re-generation process. Pin Cherries are edible as are most of the berries in the forest, and provide a staple for such diverse residents as Bears, and Cedar Waxwings. Me too, of course as pin cherry jelly on home made bread is delicious. And you have not lived until you have tasted N. Ontario wild blue berries which grow in abundance, and again provide a staple food for wild life, especially the black bear.
﻿﻿
﻿﻿
﻿
﻿
﻿
﻿
﻿﻿﻿﻿
﻿﻿﻿﻿Just to show that we do have snakes, but none of a poisonous kind, I included this garter snake. The Northern Flickers, opposite, are ant eating woodpeckers, and are therefore ground based. This pair are two males ,as they have moustaches beside their beaks.
﻿
﻿
﻿﻿
At last the lake!!﻿﻿ The top photo looks south while the lower photo is almost directly across from me. Remember the lake is uninhabited. Attractive shoreline isn't it?
﻿
﻿
The leopard frog is apparently wearing his northern colours as is the garter snake shown earlier.﻿﻿
﻿﻿
﻿
﻿
﻿
﻿

﻿The Lake is home to Canada Geese, Mallards, Mergansers, and Ring-billed or Herring Gulls.﻿

﻿
﻿
﻿
﻿
﻿
﻿
﻿﻿﻿
﻿﻿﻿
﻿﻿﻿﻿
﻿﻿
﻿﻿
These photos are from the second day,so it's sunny. If you look closely you'll see a clear ice skim on the lake, and a cairn on the outcropping to your left, so someone has canoed or used a kayak in the area. Notice anything else??﻿
﻿﻿
﻿﻿ That's right as the sun rises and hits the ice on the lake, a mist is forming. The mist is intensely cold, and enshrouded the whole lake while the sun stayed bright. It was so cold I moved inland to warm up.﻿ As I said before the lake is in a bowl and I think it was just some sort of inversion, but it sure surprised me.
There are about six lakes that connect to the north of this one, and another series to the east. We'll have to see how I do reaching those.

A post to Sky Watch Friday @http://skley.blogspot.com/
Posted by Unknown at 8:00 AM

Email ThisBlogThis!Share to TwitterShare to FacebookShare to Pinterest
Labels: A Hike to Mystic Lake.