More Strange Happenings On the West Side Of The Vermilon River. A Post to MWT and WBW. 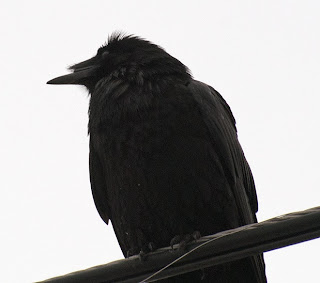 When we're hiking the west side of the River, I always like to check in with Huegin, Broken Beak, clan leader of the Ravens. I introduced him in an earlier post. He usually comes up with a fine show for us. All these photos are reduced in size to about 700 pixels, one side, so click to enlarge, and watch the slide show. 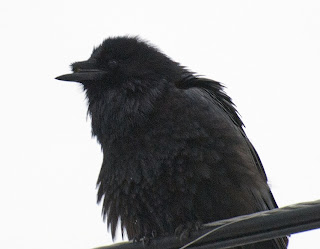 Although this time he warned me that spring was here, and all the creatures were moving around and acting pretty frisky. So I should take care. 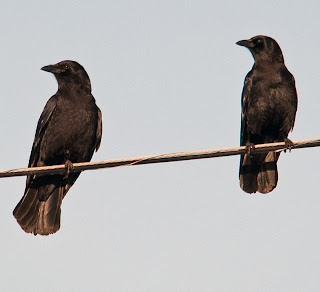 Huegin runs a tight clan as these Ravens are showing. It's a perfect eyes right. 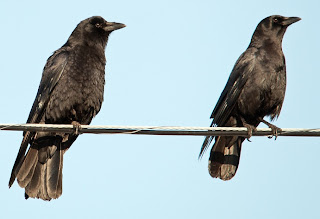 And indeed a perfect eyes left. 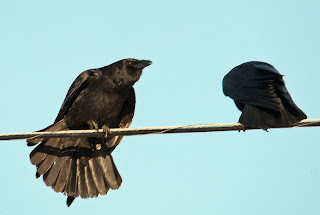 Then, things seem to go to pieces, and the larger one, the male seems to be asking for a date. All accompanied by the aerobatics shown below. 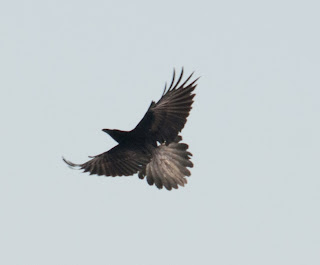 After all that display, I wonder what would come next. 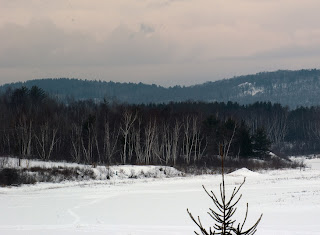 The day was perfect, although it started with cool temperatures. But as the day progressed the sun came out, and it became quite warm. I couldn't get into the west trail as the snow was too icy with the melt, so I just used the road. Opposite is the River to the north 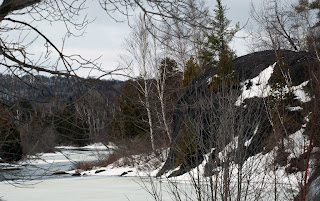 The River to the south, but concentrating on the rocky bank, and showing more open water. 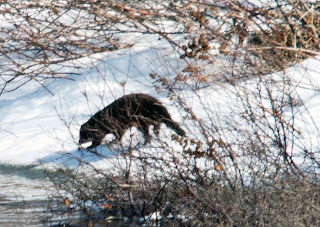 I bumped into some friends and just as we sat down to talk, there was movement on the river shoreline, fairly far up stream. I'm shooting with the 150-500mm, so you have some idea how far away this critter is. He's got the mustelid or weasel shape. 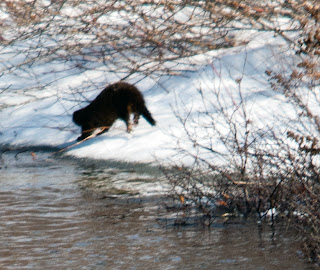 He continued to forage the area, possibly hunting for red squirrels or rabbits that live in the immediate area. 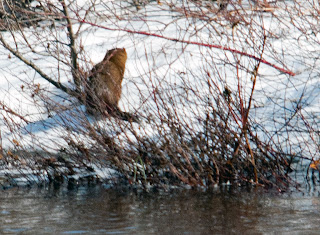 The back view shows his ears, and colouring. 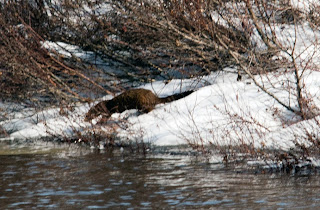 And this view shows his shape even more. 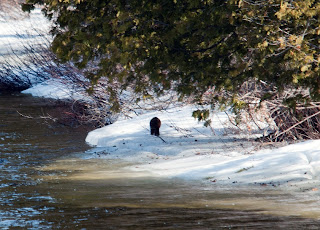 Unfortunately he then left at a leisurely pace, of course leaving the question which mustelid was he? All four live here. The Marten, the Mink, The Fisher ,and of course the grandaddy of them all the Wolverine. I went immediately to the web, and actually to wikipedia under the four classifications as their copy and photos are pretty good. Their photos are in the public domain; and, hence usable with attribution. The wolverine the marten and the fisher are courtesy of Wikipedia then. The mink are my shots taken last year. 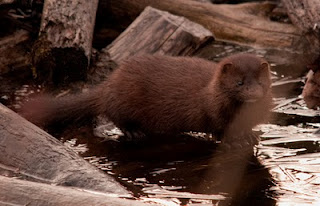 I enlarged the new photos to get some idea of the colour variations in the coat. At about 300 percent the photo is grainy, but there is a colour mask on the face in the new shots. Opposite is my wild mink shots, and there is not a real face mask, just an orange patch under the chin, shown in another photo.

Cute little fellow, but don't take him home as he'll eat the cat and dog. 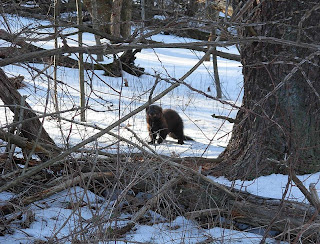 This is a Wikipedia shot of a Fisher called a Fisher-Cat in the US. He's bigger, although I don't find size a good indicator, because we're not in the zoo with all these guys lined up together. He, also, doesn't have much of a face mask. So I don't think it's a Fisher.
This is the grandaddy of them all, the wolverine again courtesy of Wikipedia. But he's too big, and has colour variations in his coat, although he has a face mask. Our guy does not have the coat variations. 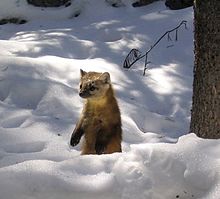 Again from Wikipedia this is a Marten. He is the smallest of them all, has the face mask, and definitely the ears of our guy.  So I'd say that our unknown is a Marten, although there is a chance he could be a mink. Anyone who wants to add an opinion, feel free. It's funny with four legged critters in the wilderness suddenly they're there and then they're gone. Again Huegin, Broken Beak came through with a great show. 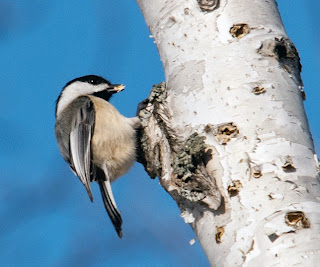 Now it's time to stop playing detective and post some known wildlife like this Black-capped Chickadee. I still have some Redpolls and Pine Grosbeaks left, although the Redpoll flock is much diminished., and only one or two Grosbeaks remain. 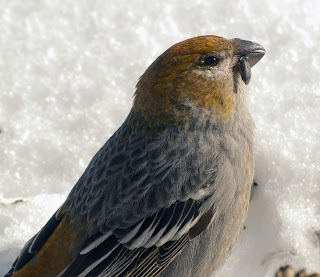 Opposite, another close up of a Female Pine Grosbeak. A post to MWT @ http://ourworldtuesdaymeme.blogspot.com/ and WBW @ http://pineriverreview.blogspot.com/  JUST A NOTE AND YOU SHOULD WATCH THIS VIDEO TO SEE HOW TOUGH THESE GUYS ARE AND THE PINE MARTEN IS THE SMALLEST OF THEM.: I received an email from Jack Illingworth at NWO Birds, a group from the North Lake Superior area that I belong to. At their cottage, they hung end of date meat, and attracted a Pine Marten, and video taped it. It's probably one of the best tapes I've seen. I have always wanted to bait wildlife for photography, but they like me live in a wilderness. There are no friendly rangers to get you out of trouble. They have their cottage to go to, and I don't. Anyway watch the video to see how aggressive these guys are and remember they're the small members of the family. Click http://www.flickr.com/photos/jamuudsen/6995526497/in/photostream
Posted by Unknown at 9:07 AM