On The West Side Of The Vermilon River with Some Protective Moms. A Post To MWT and WBW.

I hiked the lower River on Friday morning and just missed the rain, which may last until Sunday. This post is divided as usual, dealing with the protective moms, aquatic birds, in the first part, moving onto the small birds. In the small birds section the Yellow-throated Warbler is new this season,although he was here last year,while the Red-eyed Vireo is completely new to me. 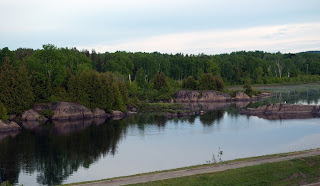 Since the post is long, I'll use captions as much as possible. I split the flowers into non-fruit bearing,  and fruit bearing. The forest is a riot of colour now. All of the fruit bearing trees or flowers do not mature at the same time. In some areas the blueberries are actually out, which will make the bears happy. The pin and choke cherry trees will produce fruit fairly shortly, and this will please all the wildlife. The Goldfinch were shot at my feeders. CLICK ON THE PHOTOS TO ENLARGE, AND SEE THE SLIDE SHOW. 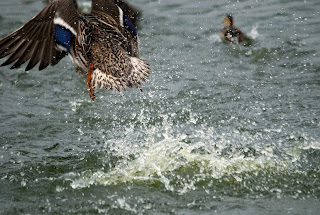 The whole protective mom sequence was shot in the big wetland when I stumbled onto a female mallard and her ducklings, as well some Canada Geese and their young. Opposite is the female mallard breaking cover. She virtually runs on the water as do the small ducklings.
A post to MWT and WBW. Click to see other entries. Just a note: It's Sunday and still raining. I think we need it disparately as the River is the lowest that I've ever seen it at this time of year. 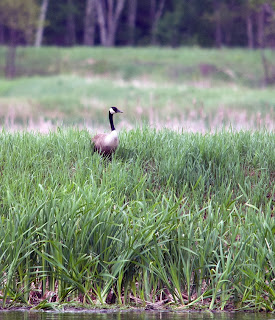 The Geese have a perimeter guard on the trail, which I normally use. This meant that some goslings were around. There was only one gosling, so they've lost most of the young to predators.