A Hike To A Beaver Pond of The Vermilon River. A Post to MWT and WBW. 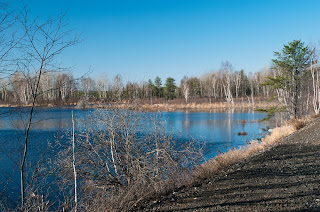 With the early spring, we're out in the east track area. This is another abandoned railway track, although part is still used to shunt trains. Its a good idea to use the track because the bears may be moving around now and the track area allows you to have more visual protection. The destination is the beaver pond. The photo opposite shows the stripped railway bed, and the beaver pond to the west. CLICK ON PHOTOS TO ENLARGE, AND SEE THE SLIDE SHOW. 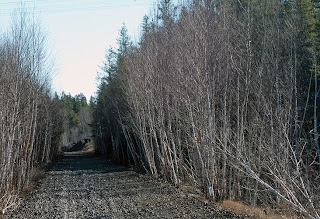 This photo looks to the west where the trail goes on. You can just make out a rock outcropping in the background. The trail is not straight but wider than the abandoned track on the west side of the river. There is a forest trail which we'll use to get back. 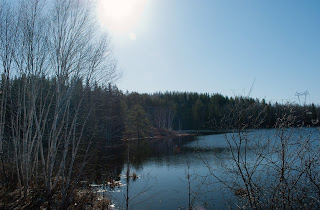 This photo looks west again, and gives you some idea of the pond size. It is in fact a small lake. There are numerous other trails that branch off this area, so the possibility of longer hikes is almost infinite. 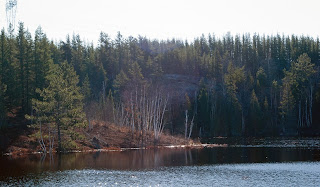 Still looking east, this photo shows the eastern rock outcropping. The hydro lines are a bear highway that the bears use to raid garbage pails of a vacation area south of here. But by enlarge the area is uninhabited. 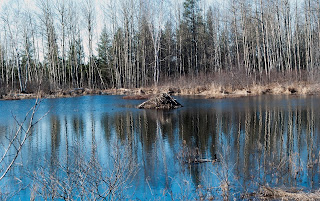 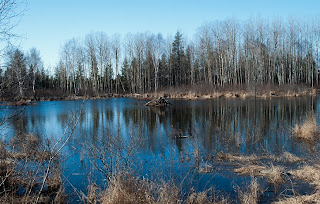 There are two lodges in the pond, both on the far side. Beavers tend to build a work highway and it is on the far side as the trail makes them vulnerable to their predators, which are numerous. 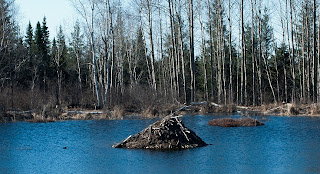 The lodge contains a sleep and eating chamber. Beavers are not true hibernators, but they do store food. But they venture out in the winter. 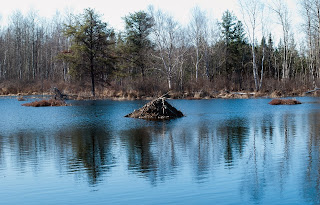 Another close up of the same of the lodge. 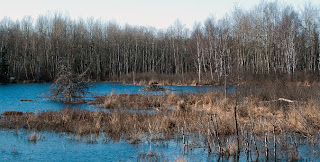 This is the second lodge. 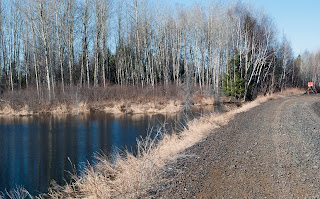 This photo looks west. The red sign marks the beginning of the actual track section of the roadbed. The narrowing of the pond also indicates the site of the beaver dam. 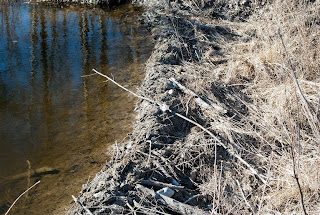 This is the dam. Last year the dam was breached, likely because the water was high. Since then the beaver have repaired the dam. People sometimes point out the negative problems of beaver dams ie, mainly flooding. But beaver ponds protect endangered species, cause regeneration of forests, and clean toxins out of the water. All of these toxins are man made such as nitrogen, phosphates, and others.The conflict with man is really a quarrel over space. If man wins the land becomes contaminated. If we're lucky the beavers return and clean it up. This includes a lot of agricultural pasture land, because beaver ponds also clear up farm animal waste. 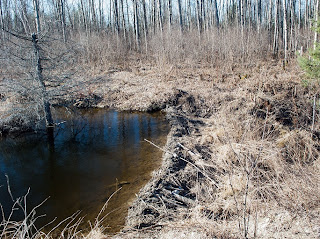 You can cross the dam and hike the wetland behind. 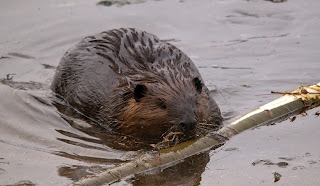 The beaver is a semi aquatic rodent. A fully grown beaver weighs about 14-27 kg or 31-60 lbs. They have a heavy layer of fat, thick fur, and use the musk from their glands to waterproof their coats. 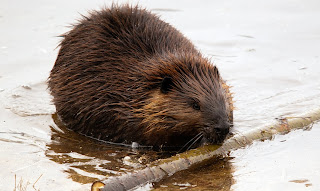 They are perfectly adapted to the water. They are able to close their nostrils, and ears and have a nictitating membrane that permits them to see under water. 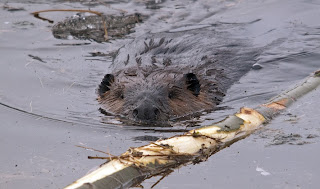 Their tail is scaly and used for swimming as well as to communicate danger. Their front feet have five fingers, which are nimble allowing them to manipulate the wood they use for food and building. 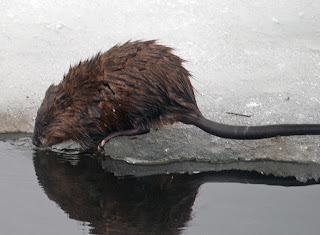 I put this muskrat photo in to show you the difference between the two. All the rest of the photos were taken at the beaver pond and show the biodiversity of the pond itself. The Vermilon Forest is a re-generating forest, and the larger numbers of wetlands and beaver have surely contributed to this regeneration. 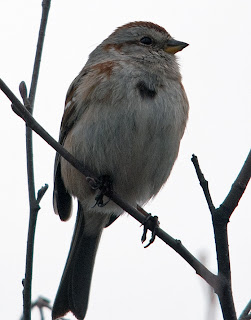 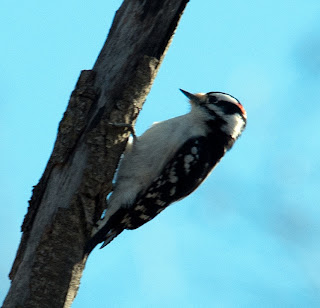 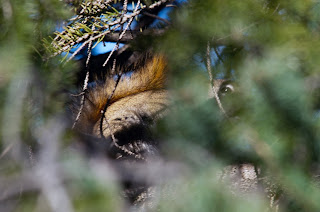 This Red squirrel was hiding from me. I returned on the land trail and not the track. The forest here is thick and makes it harder to catch the wildlife. 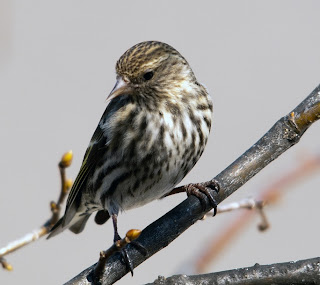 This Pine Sisken ends the photos. A Post to MWT @ http://ourworldtuesdaymeme.blogspot.com/  and WBW @ http://pineriverreview.blogspot.com/  Most of the information is from Wikipedia, but the web is loaded with excellent sites that will dispel a great deal of beaver misinformation. For instance you don't have to trap beaver to stop flooding, just use one of the newly developed pipes. There is additional information that trapping beavers doesn't work, others just move in. Apparently, the same can be said of the bounty on coyotes in Saskatchewan. The coyotes are apparently on the increase despite the bounty.
Posted by Unknown at 9:29 AM