New and Old Sightings On The West Side Of the Vermilon River. A Post to SWF. 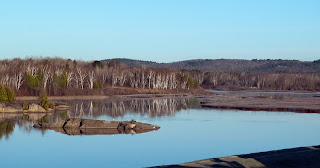 The storm swept through the US Midwest,crossed the Great Lakes bringing a temperature drop from 20C(upper 60's F) to -5C(low 20's F) or so, all in a day. The temperature drop was accompanied by snow flurries. So once the storm cleared, Boom & I were on our way. The morning was cold, but as the sun rose, it warmed the air. Remember, click the photos to enlarge and watch the slide show. 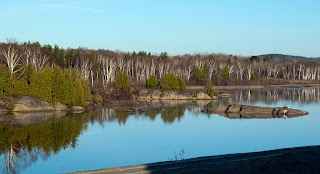 All the scenic photos are of the upper River for a change. You can see the effect the sun has on the water in all the photos. The water is really copper coloured, and shows black on overcast days. 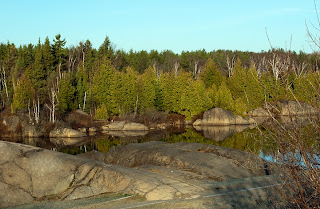 This is a shot of the far bank. As you know I'm fascinated with water, but what struck me in the shots below, taken of a little rapids, was the reflection, and the jello look of the water as it flows over the rocks. 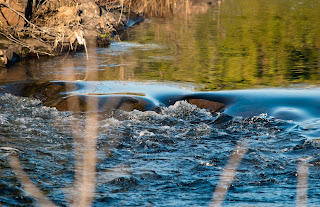 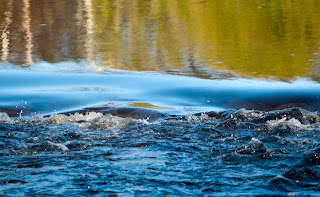 It fascinated me so much that I included a second photo. 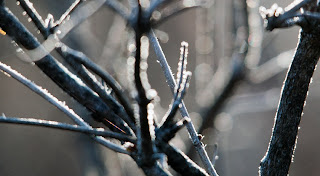 The day started off with a heavy frost and the sun's reflection created fairy lights in the tree branches. 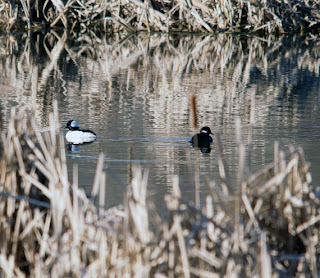 These Buffleheads were in the big wetland.

The Buffleheads were lucky for us as I finally caught up with the Wood Ducks, who normally take off like a shot when they catch sight of movement. 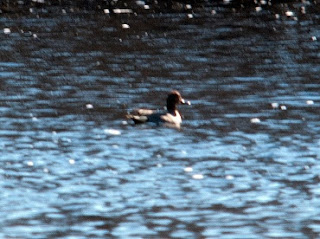 This is a female Common Goldeneye that was on the far side of the River. Too far for my lens. 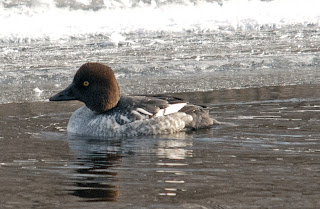 But this is a shot I caught of her when the ice was still on the River. They're real northern ducks and stay as long as there is open water in the winter. 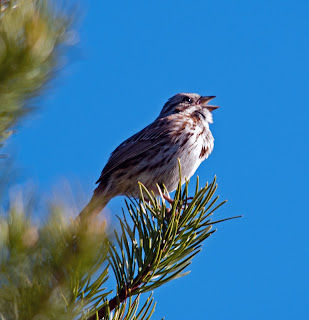 The song sparrows were in fine form. 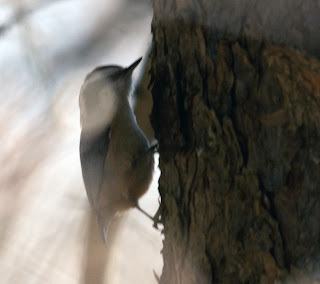 I caught this guy in the stand of black spruce. He's a real find as he's a Red Breasted Nuthatch, the first I've seen here. 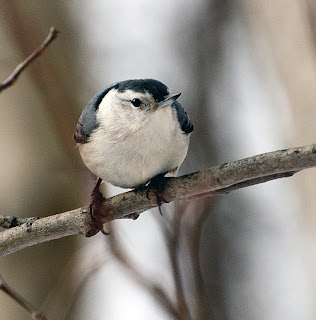 I included this photo of his cousin the White Breasted Nuthatch, which I had shot earlier. You'll see more of these guys in another post. 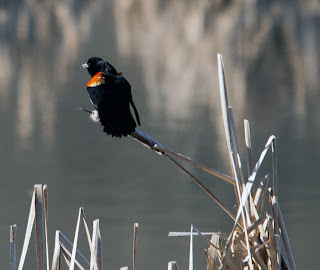 Even the Red-winged Blackbirds proved  lucky. 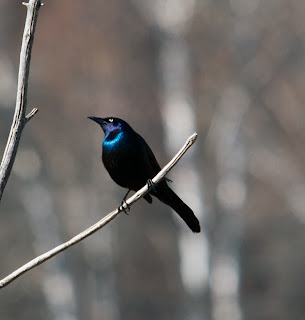 I included two photo's of the Common Grackle, not only because the sun lights him up well, but also because he's central to our detective game. 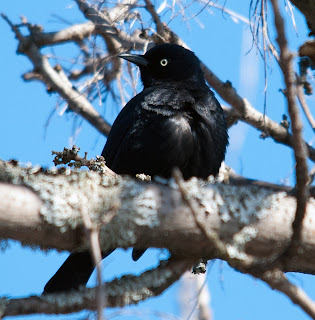 "Birds of a feather ..." is an old adage, but certainly true with Blackbirds. I'm pretty certain this is a male Rusty Blackbird. He's a real find as they're under stress because of oil  in the Tar Sands, and river dams being constructed  for hydro in Quebec. Now begins the detective work. For that I use Cornell. But if you compare him to the Grackles above what stands out is the difference in the beak. 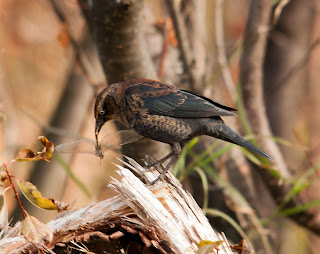 This is a photo that I took this fall of A Rusty Blackbird in non-breeding plumage. 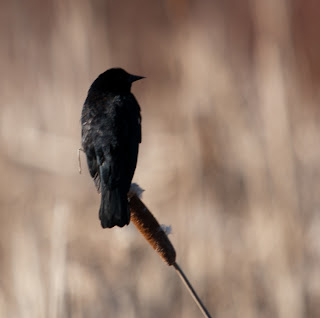 This is another case for Cornell as I think this is a Brewers Blackbird, but I still need to do more work to confirm the ID. 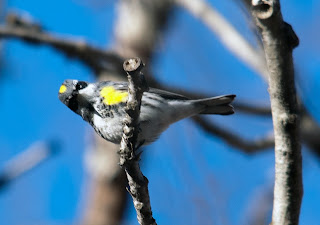 Just as exciting as the shots above are these photos. This is a Yellow-Rumped Warbler in breeding plumage. The first warbler sighting of the season. You'll see more of these guys in other posts. A Post to SWF @ http://skyley.blogspot.com/ , Camera Critters @ http://camera-critters.blogspot.com/ and Scenic Sunday @http://scenicsunday.blogspot.com/