Boomer of the Vermilon River-Post to Pet Pride. 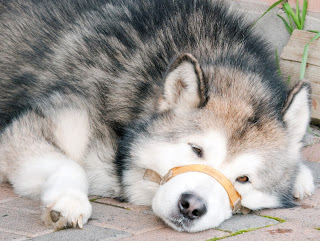 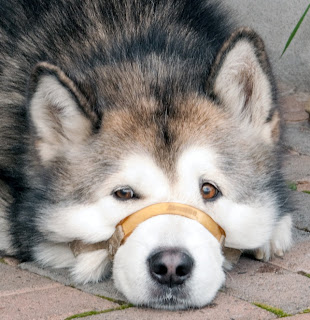 He's in the masthead too. Boom is my companion, friend and co-publisher of the blog. He's an Alaskan Malamute, a very different type of dog in that they're pack oriented, not territorial as most dogs are. That likely comes from years and of selective breeding in a hostile environment. They pulled the sleds when the Inuit hunters went out on the ice floes to hunt seal. They are ice dogs and will not cross unsafe ice and in fact will turn a sled automatically. They are fastidious about their coats and tails, and share wolf traits other than the pack. Males will raise pups like an uncle wolf, they are devoted to the pack which includes their human, and human's children.They're not for the non-active, because they'll pull your sled, pull you on skis, or in line skates. But don't get one if you can't take shedding or just want to chain one up out back, because they crave human contact.
Boom was a rescue dog. He had been bought by a couple who divorced and gave him to their parents who chained him out back. He was picked up by the SPCA,where the breeder reclaimed him. She could not put him back in the kennel because he would have had to fight his way through the pack to earn a spot. A responsible breeder she had other dogs like him, and kept them to-gether. I had lost a dog and she wanted to give me one, and I ended up with Boom. He was about 14 months old. Shortly after I had a terrible accident and broke my hip, shoulder, and almost my jaw. In short Boom's lifestyle was in danger again.A friend took him and trained him to the haltie leash which Boomer took to, and Boomer began to work with me after a brief discussion he and I had. In short Boomer learned to walk according to my needs and to this day, if he spots wheelchairs or canes he becomes incrediblely gentle. Now we're both retired and he loves it.
So if you can get one read up on them to see if they fit your lifestyle and you theirs.

Email ThisBlogThis!Share to TwitterShare to FacebookShare to Pinterest
Labels: Boomer