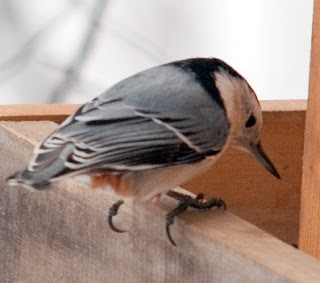 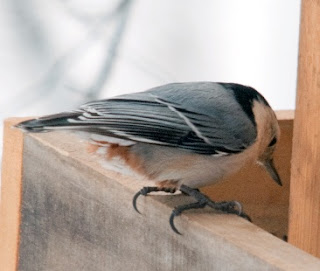 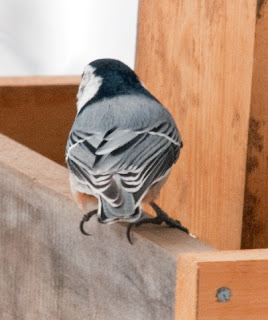 I was really excited to see this guy as well as the area where he was feeding. I had originally gone to take some monochromatic winter photos, since I live now in a gray area, of the rapids located on the abandoned RR line on the east side of the river. Everything was fine until I arrived at an area that was filled with snow drifts, and therefore impassable. I turned around, changed lens ,and noticed swarms of chickadees deep in the forest feeding and went to see what was going on. Someone had set up numerous feeding stations and stocked them attracting this guy as well as other birds.I'm so intrigued by the idea that I'd like to try and duplicate it in another area.

The White-Breasted Nuthatch is not an especially rare bird but for my area and in the winter is . So I'm pleased  that I got these photos. They are generally attracted to deciduous forests, but now will reside in mixed as mine is. They are insect eaters, but will feed on nuts such as acorns and apparently sunflower seeds as they are here. They move up and down trees upside down, and get their name from their habit of putting the nut in the tree bark and whacking away at it with that splendid beak they have.

All information is from the Cornell Lab Site.

A Post to World Bird Wednesday.
Posted by Unknown at 9:39 AM