Red Squirrel of the Vermilon River. Post to Camera Critters #141 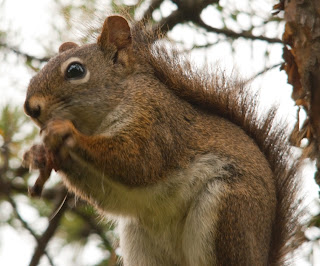 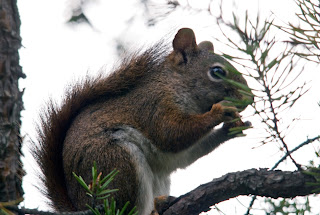 While Southern Ontario has its black and gray squirrels, we in the Vermilon River have our red squirrels(common to all parts of Northern Canada). They are a conifer feeder; namely on the cones that these trees produce; although they will also feed on insects, seeds etc. As well they feed on the sap of conifers. The squirrel bites the tree allowing the sap to dry,and then returns to feed. Their hoard of cones, seeds etc. are stored in "middens"which they tend to forget about and thus aid in the re-generation of a forest.

They are solitary except for the mother after the birth of her young. They are smaller than the gray or black but larger than a chipmunk. They are no longer restricting themselves to coniferous forests, but are expanding into mixed forests.

The fellow depicted here allowed me to get fairly close because he was in a dense tree, and concentrating on his lunch. The photos were taken at the lower end of  the Long Lake wetland. In earlier posts I took my readers on a tour of the wetlands. See the archives if you want to tour them. He is in no way habituated; he is a creature of the forest, and took off as fast as possible once lunch was complete.