Common Redpolls Of The Vermilon River. A Post to WBW. 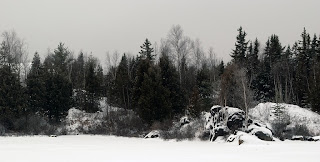 Although this post is about Redpolls, I wanted you to see the environment that these little members of the finch family inhabit. We've been running lows of  -24 degrees C to highs of  0 degrees C. The temperature differences have been fast and furious with some rain yesterday turning to wet snow to snow later on. Today it's sunny and -27 C with the windchill, -29 C, somewhere around minus 20F.  The first shot is of the far river bank, and the almost sepia tones indicate the degree of cloud cover. 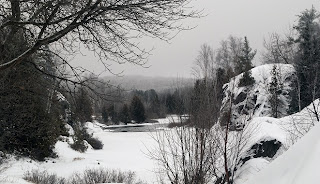 The white areas in the forefront are river areas where the river meanders, and an ice skim forms. The second shot is the River looking south. You can see the fog over-laying the ridge. 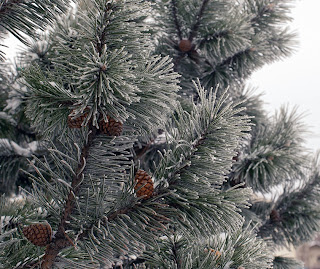 But it's cold enough for the fog to create a frost, which runs from heavy to extra heavy. 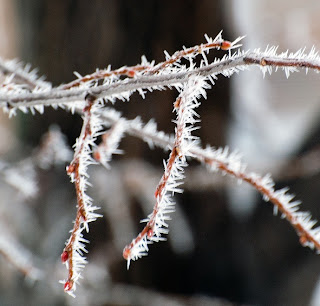 This is the extra heavy ice crystals. It's really no warmer,  no matter what the temperature is. In fact it's just a choice between dampness, or intense cold. Frankly,I prefer the cold. But this and more is happiness to The Redpolls.

This map courtesy of Cornell Labs puts me firmly in the blue, the winter vacation area for the Common Redpoll. Summer puts them in the James /Hudson Bay area, which is their breeding grounds. The point: these are tough little guys. I tried to work out how far I am from the Boreal using the train map to White River, and converting to a direct distance.  About 150 miles I'd say, but it's a guess. Nevertheless I'm just on the border of the Boreal forest. So I'm just a natural destination for them. 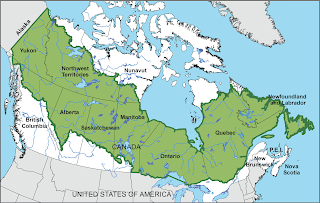 This map courtesy of MNR Canada shows the Boreal forest area of Canada, which is second only to Russia in extent. In fact all the provinces have a piece of the Boreal except the Atlantic provinces. Newfoundland has a piece of the Boreal by virtue of its ownership of Labrador. The NW Section of the Boreal forest in Ontario ( Lake Superior and north only) to give you an idea of size would extend from Paris and Munich in the south to Scotland and Denmark in the north. Mostly I'm on the fringe of the Boreal; in fact in the Great Lakes/St. Lawrence forest, a temperate forest, although as I've said before we have all the coniferous and soft woods of the Boreal as well as extensive wetlands and bog land. The Redpoll is a birch tree follower living on the seed pods, and the Vermilon Forest is full of them. 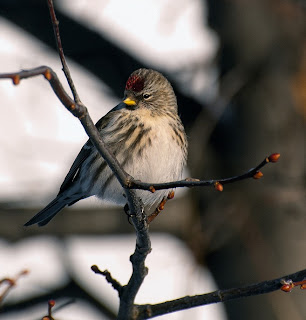 So here is the hardy little fellow. About the size of White-throated Sparrow, smaller than a goldfinch even, these birds inhabit the Boreal. This is a female Common Redpoll. There is another edition, the Hoary Redpoll. They travel together, but I haven't seen any yet. 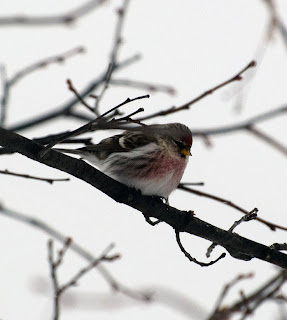 The male has a red flash on his chest area just below his head. 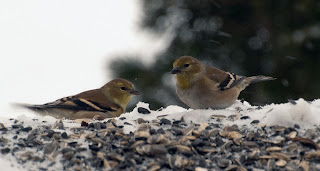 It's quite common to find Goldfinch travelling with the flock of Redpolls, as they're after the same seed in the birch pods. 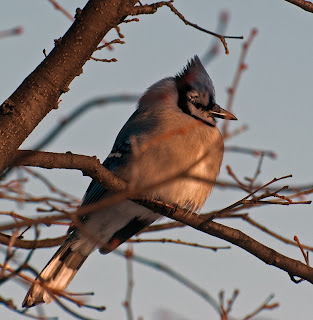 They're aggressive and travel in flocks. I was initially shooting them on the west side of the River, but more have moved in. My flock has about fifty in it. They'll even stand up to this Blue Jay, when it comes down to food.
A Post to WBW @ http://pineriverreview.blogspot.com/
Posted by Unknown at 7:53 AM