A Wintery Hike On the West Side Of the Vermilon River. A Post to SWF 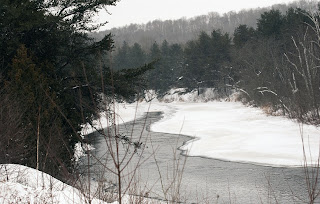 In between a snow fall of 20cm, about 10 inches and one today of 15 cm., about 7 inches, we got in a hike to the west side of the river. All the snow was accompanied by high winds so the drifting was something else.  These are different scenes of the Vermilon, and as you can see there is no sun. Most of the light is reflection off the snow. 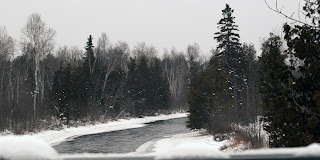 We didn't get as far as we wanted to, because of the cold and high winds. The top photo is the River flowing south, and the one opposite is the River on the northern side of the bridge we cross. You can also see the ridge in the background of the first photo. 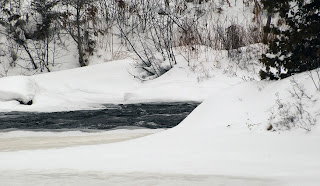 This is an open stretch in front of the rock islands. 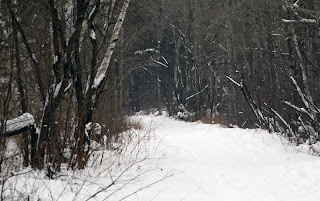 And this is the west trail, an abandoned railway track. In the grey light it looks like the beginning of a foreboding Grimm's fairy tale, but Boom and I are not afraid. 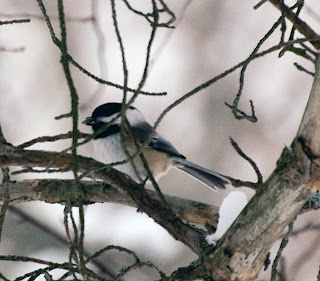 Black spruce trees grow thickly here, as well as birch trees, so it's a great spot for chickadees. And that's what we were looking for as well as anything else of interest. 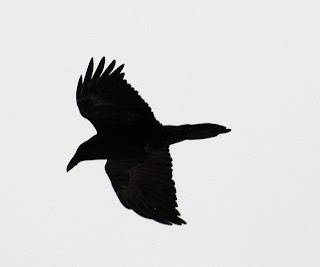 The west side of the River is Raven country and Huegin picked us up right away. He's called Huegin after the Raven that sat at the right shoulder of Oden, king of the Norse gods. 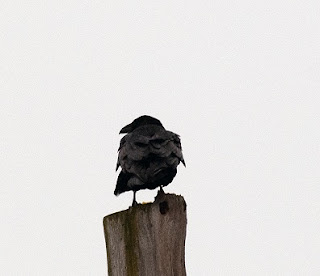 This is Huegin on a pole maintaining his balance in the wind rather well. You can tell a crow from a raven by the in flight wedge shaped tail. The crow has a circular tale. 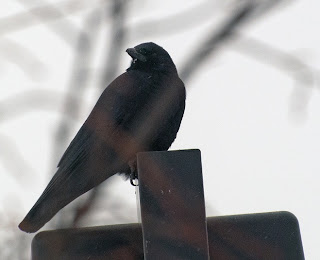 This is Huegy, our Northern Crow. Now you can see that he got his name form the Ravens, but in size he's much smaller so his name is smaller. He doesn't enter Raven territory. 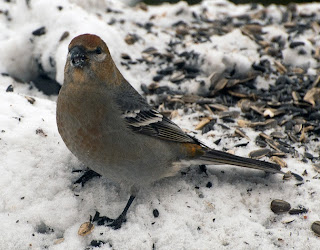 This is female Pine Grosbeak, another finch from the Boreal forest that over winters here. 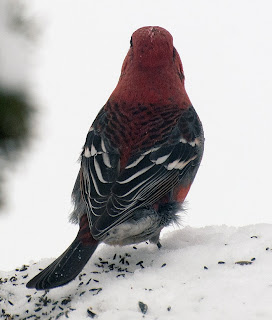 This is the male. You can see how the grey skies just provide a back drop for the resplendent colours of these birds. 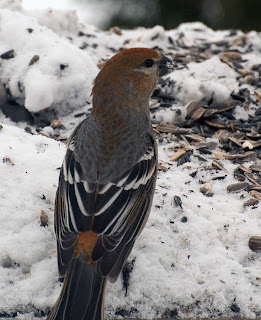 That yellow rump patch is pretty fancy too. 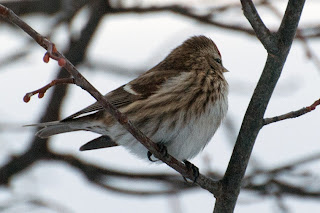 Yes the Grosbeaks are finches also, although they're about the size of Blue Jay and the Redpolls are smaller than the Goldfinch. A Post to SWF @ http://skyley.blogspot.com/; Camera Critters @ http://camera-critters.blogspot.com/ and Scenic Sunday @ http://scenicsunday.blogspot.com/