Staying Warm On The Vermilon River. A Post To MWT and WBW. 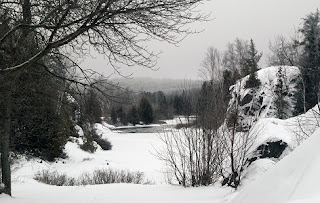 Many people visiting the site over the last posts, which detailed the cold, commented on how difficult it must be for the smaller birds to survive, especially the Redpolls who migrate south from the boreal forest to me to spend their winter.

So I went looking for that answer on the web, and here's what I came up with, which is mostly drawn from Birding about.com and Beyond Penguins and Polar Bears. 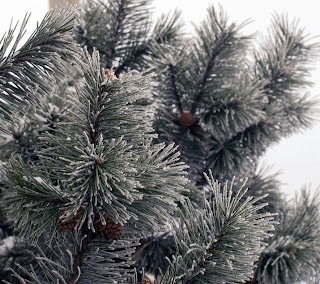 The temperature here lately has been about -10 C up to 0 C. We've had more snow and in the warmer times the fog produced by the snow has formed a frost on the trees. I haven't looked at the long range so I don't know if we're going to dip into the -20's or not. 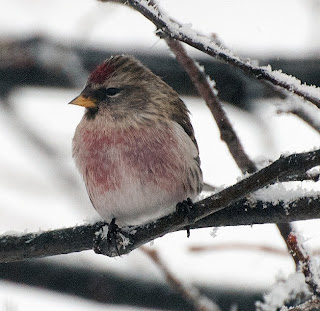 Just to start, birds run a high temperature anyway about 105 F to our 98.5 F. And that core temperature is key to their survival. Mother Nature has equipped them physically to withstand the cold, and it starts with the moult when their feather coverage thickens. As well the feathers are oily for waterproofing, and insulation. Scales on the feet minimize heat loss. As well the birds are able to adjust heat in their extremities to avoid heat loss. A better explanation is given below. 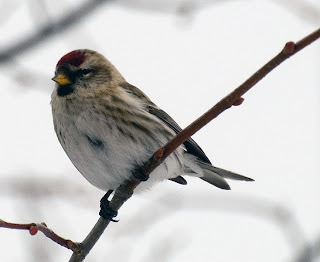 The birds are naturally programmed to build up fat reserves, and will migrate for food. The little Redpolls shown here are voracious eaters, and seek food by overwintering here. 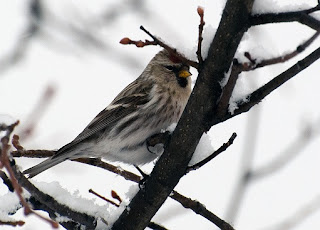 Certain behavioural action also warm them. Fluffing their feathers creates air pockets. This air is then warmed from their core body temperature. 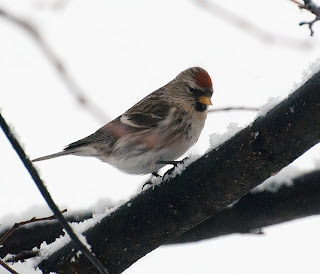 As well they tuck their beaks and feet into their feathers for warmth.

They sun themselves and will angle their body for the most exposure. In addition they raise their feathers to maximize the sun's penetration. 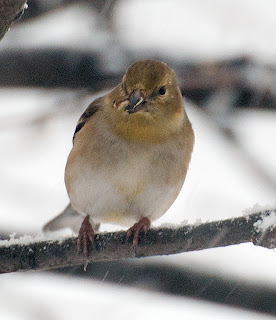 Shivering raises their metabolic rate. Just a brief aside the previous photos are all Common Redpolls. The males are recognizable by the red blaze under the beak. 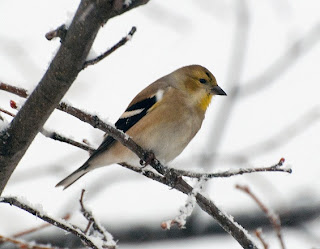 At night they stay in flocks in protected trees,coniferous trees, for warmth, and predator protection. Again an aside: The Redpolls are finches and are flocking with the Goldfinch. 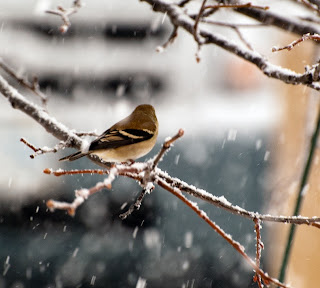 I included this photo because it shows the falling snow. As well the birds at night can enter a torpor state which lowers their body temperature to conserve their energy. 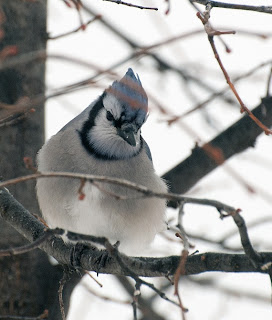 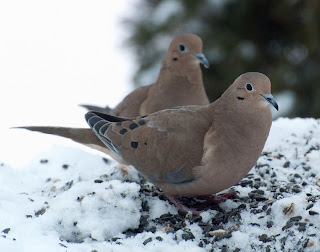 The same applies to the Blue Jays and the Mourning Doves. 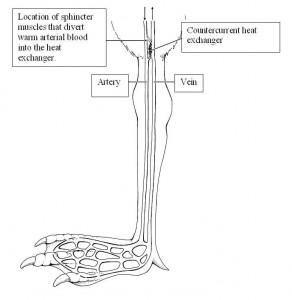 Fine for the little birds you say how about the aquatic guys, especially the female Common Goldeneye below. They will stay while open water is available. The key is the feet of course with them The aquatics have a counter current heat exchanger built into their legs. It regulates a heat exchange between the blood in their arteries, and their veins in the legs which is just enough to heat their feet in a minimum way. The warmth of the blood in the artery is then transferred to the vein and carried back to the body area. The chart which shows this is courtesy of The Penguins and Polar Bear site mentioned earlier. 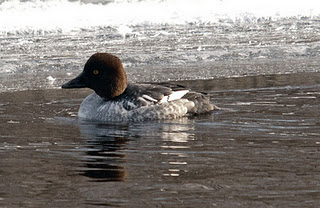 All that engineering in this beauty. The situation is similar for the Canada Geese shown below. But Aquatics will also stand on one foot on the ice which limits the stress on their leg heat exchangers. 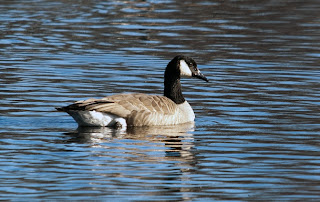 All the Canada Geese, and the Ring-billed Gull  shots were taken in late fall or early spring, so that water is really cold. 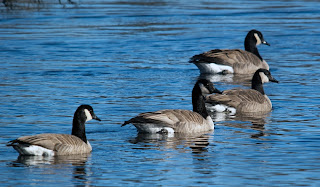 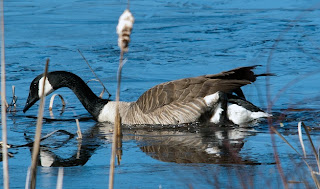 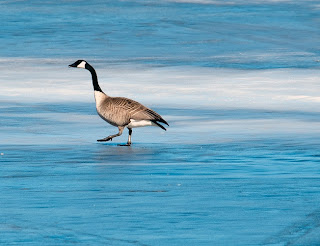 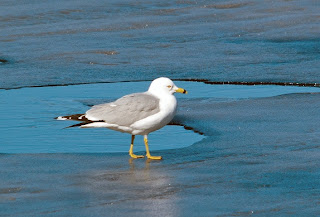 A Post to MWT @ http://ourworldtuesdaymeme.blogspot.com/ and WBW @ http://pineriverreview.blogspot.com/
Posted by Unknown at 8:42 AM