Part 2 Northern Ravens of the Vermilon River. A Post to Scenic Sunday. 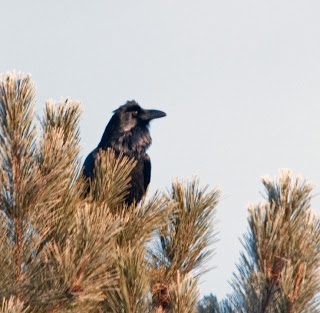 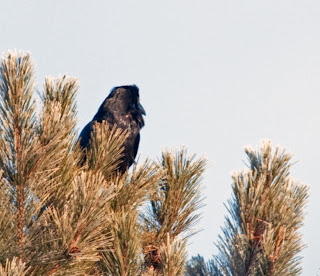 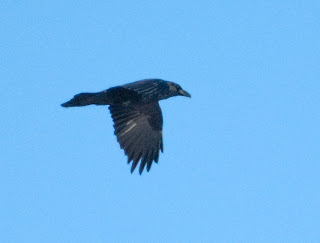 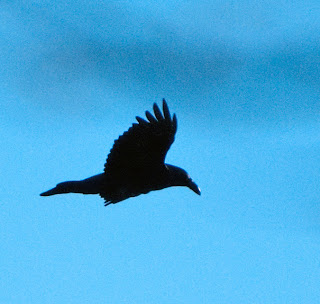 Now that we've established these fellows' grand ancestry and proper name, let's add a few more facts to indicate their acumen. But first a side comment. In the other post I reported these fellows were as large as 2.6 lbs only to find out that their weight could go up to 4.4 lbs.Also the California clade which differs from our Raven genetically,also evolved into the Chihuahuan Raven, which is genetically different also. Busy guys aren't they. Now the new facts:
1) Their lifespan is 10-15 years in the wild, but longer in captivity possibly up to 40 years.
2)They will hide and protect their hordes of food from other ravens or birds.
3) They actively steal from foxes, but will form a symbiotic attachment to wolf packs to scavenge their kills.
4) They mate for life, although they may practice sexual infidelity when their partner is away. Where do these scientists get this stuff from?

A few notes:
a) I set out the forest problem in the UK because the situation is dire and represents another dumb right wing move. As I said forests are an international concern because of their ability to trap carbon. I gave the web site for you no matter where you live to read about the UK Government's proposal and to possibly sign the petition to prevent privatization.

I do not live in the UK.

But I do live in a forest that was criminally damaged by mining.And I mean: by the companies that mine, by the people who worked at the mines, by a government that condoned it, and a citizenry that allowed it. All Canadians!!

So treat it as you would a threat to the rain forest in South America, and allow the UK government the embarrassment of looking like a third world country that the world has to spank. Go to http://www.woodlandtrust.org.uk/protect

b) The wiki article says that the Raven is distributed all over North America, but several people said that they had never seen one or had difficulty identifying the difference between a crow or a raven. They're bigger, but the ID mark for me is the big black curved beak,the shaggy neck feathers and possibly the shaggy head feathers, but the first two for sure. See photo #1.

One more note. I'm going to post a third post to My World to talk about the IQ of these fellows as it's high, probably higher than most politicians.

All these facts are from http://en.wikipedia.org/wiki/Northern_Raven

A Post to Scenic Sunday @ http://scenicsunday.blogspot.com/
Posted by Unknown at 4:33 PM