A Hike to the Long Lake Wetland of The Vermilon River. A Post to my World Tuesday.


These wetlands are a northern continuation of the East Track Wetlands. In other words the whole area is connected by lakes, creeks, and small rivers which form the wetlands. The wetlands are then increased in size by the beavers, muskrats and otters who dam the waterways. Some of these dams are removed by the RR to safeguard their tracks, but really the beaver are both better engineers and better workers,as they just replace them. The main body of water is the Vermilon River, which all this water feeds into.

In the first photo I'm facing north but looking to my left to show the rock face, which is of course the reverse side of all those panoramas I normally shoot to show you where we're going and give you a feeling of the height of the hills. Effectively we're in the interior of the hills.The second photo shows the meandering channel running north to join the lake above here ,which is Mystic Lake. The photo below again shows the meandering channel
﻿
﻿
﻿
﻿


The photo shot from the south end shows the extent of this particular wetland, and the side view should give you a feel for the elevation of the cliffs to the east. So we're in a bowl here.
﻿﻿
﻿﻿
﻿
﻿


The bog shots are the entrance to this wetland. Boomer has a fit when we go here, because we actually cross the bog over branches and small logs laid across a narrows. The mud, which is gloppy, sticks to his coat, and Boomer is a winter/ice dog, not a water dog. But the sun is really warm now and this will mean the end of his hiking season until fall and winter.
﻿
﻿
﻿
﻿
﻿
﻿
﻿
﻿
﻿
﻿

The photos are not great, but the key id markings are the white eye circle and the white area that breaks the yellow on his underside. He's apparently normal for the area but the first that I've seen.

I spotted the Northern Flicker in the tree and then proceeded to chase her all over for some reasonable shots. She's a female because she lacks the black mustache near her beak. These are ground woodpeckers feeding on ants. Since the soil is sandy, they have plenty to feed on.


When I had entered the wetland something took off. I didn't see what it was, sort of expecting it to be a Great Blue Heron which hunt here from time to time. But as I was looking around, four large birds took of from the far side of the Wetland, and continued to circle the whole area. At first I thought they were hawks, but they're Turkey Vultures. The first that I've seen. Click on Photo 1 and you can see his red head. All in all a pretty eventful day!!!

A quick note to texwisgirl: I tried to avoid small photos this time. Boom & Gary. 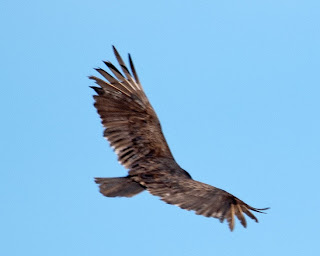