A Hike To Mystic Lake of The Vermilon River. A Post to My World Tuesday.

I had first taken this hike last year in late November before we got snow. I did this because the trail is rugged with about a 70 degree incline and narrow. I wanted to be able to see off trail so I waited until the leaves were down. The trail has its moments, especially in one area where it dog legs at 90 degrees around an outcropping that you can not see over.As well there is a lot of black spruce, aspen, and birch in the area. They rot out early,while the Black Spruce has a small root ball, and you don't want one coming down on you. Also in late November the bears had gone to sleep.

So here we are again now. Photo 1 shows you the bowl in which Mystic Lake is located, and yes, we'll be that high in areas, and close to cliffs that shear. To the north there are about 7 additional lakes and to the south Mystic Lake flows into the Long lake wetlands, and onto the Vermilon River. All the lakes have wetlands and all are uninhabited so we're alone.

Oops, forgot to tell you about those two rocks. Just walk quietly and don't breath as they're on a rock shelve above us. This is the first view of Mystic Lake looking north. All that short brush along the shoreline are blueberry bushes, and the water is clear and cold, but not potable I would think.

Mystic Lake is fairly large. I came up not just because it's so beautiful, but also because the Vermilon is in flood and the aquatic birds have moved off to find other nesting areas. And I was right, they're up here.
﻿

We're going south by trail to the narrows so it's further and more rugged than it would be by kayak or canoe. We're actually going to hike to the hydro pole shown in the photo below. In effect we'll be backtracking at the foot of the cliff we came in on. The we'll climb up to that hydro pole.


We've come a long way, and we're at a fair elevation now. The trail is a difficult one not just from the incline but we're passing through several small wetlands and streams which are gloppy, so we have to be careful.﻿﻿﻿
﻿﻿﻿
﻿﻿
﻿﻿


These streams are not only pretty but they feed the forest floor, and I included some of the wild flowers in the post.


The first flowers to show are the blueberries, the dogwood and the violets. All of these, except the dogwood, are small flowers. The other one I didn't get a photo of was the wild strawberry flowers, a few of which are out now. 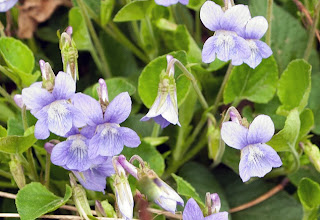 The ducks were there, both the buffleheads and the Mallards, and some geese were in one of the wetlands. I didn't take any photos of the aquatic birds as I had hiked quite far, and I had forgotten to take my water flask, so I wanted to get back. Remember I had to back track and pick up the old trail that I came in on.

Just a quick word about insects, they're out in droves. Black flies don't bite me, but mosquitoes do at least for a short while, so I'm wearing my netting and gloves. I wear a hat, with a strap so it doesn't blow off, on top of the netting with a brim so I can get the camera easily under the brim. The hat shades my eyes so I can see. I don't wear sunglasses as they would just be another inconvenience as I have my cane in one hand, with a strap so it never falls either,but I can release it, and the camera is cradled in my arm. But the whole rig is hot, so that cool Mystic Lake water is very refreshing.

I'll be posting the wildlife photos that I took to WBW on Wednesday.

A Post to My World Tuesday.
Posted by Unknown at 3:25 AM