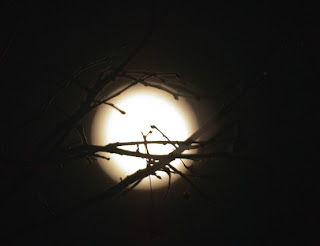 This should be a novel beginning with" It was a dark and stormy night..." But it's just Boomer and I having some fun.  The moon last night was not only full, but exceptionally bright. 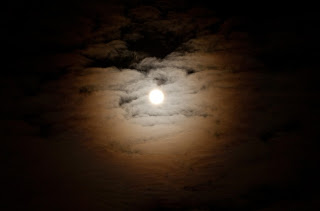 So bright in fact it created a halo effect on the cloudy sky. 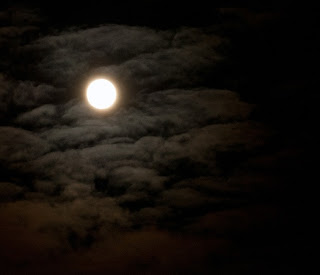 This is the same moon with just a different crop. I should add the moon light is cold to match the temperature. We left early yesterday and the temperature was about-14C, just above 0F. No, neither Boomer nor I howled at the moon. 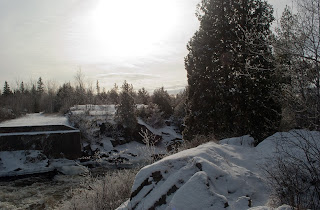 We hiked the west side of the river along the abandoned railway track, which is any easy hike. The scene opposite which is taken at the trail end, where the rapids is  shows the weak sun. The cold temperature and the weak sun made for a slow melt so the frost stayed on the trees. 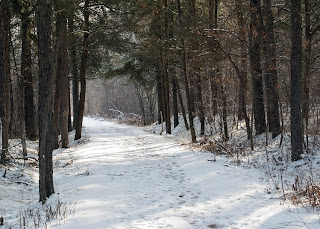 I'm not sure if I've photographed the trail before, but this is it. It's as I said before an abandoned railway track. This particular spot is usually loaded with wildlife as it's a  heavy stand of trees providing shelter and food. 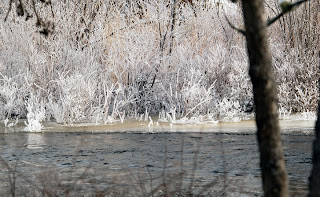 This is one of the marshy islands in the River. All the small trees are frosted up. 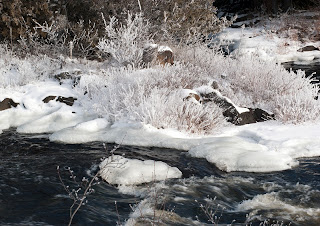 This photo is of the end of the small island in the rapids. There are rapids on both sides of the island. 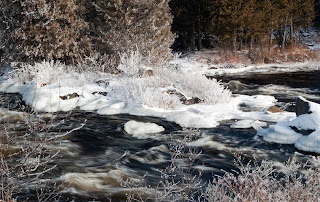 Same view as above, although this time you can see the rapids on the far side of the island. The islands are just rock outcroppings common to the Canadian shield. 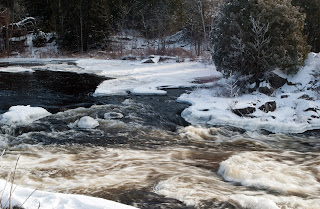 The River comes back together into a single channel, and forms a chute between the abandoned bridge abutments shown above. 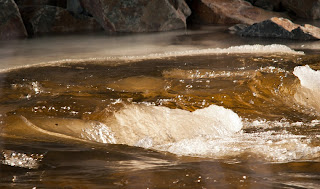 This little rapid is actually under the Bailey bridge that Boom and I cross to the west side of the River. The colour depicted is the actual River colour, a copper colour from the mineral deposits in the rock. 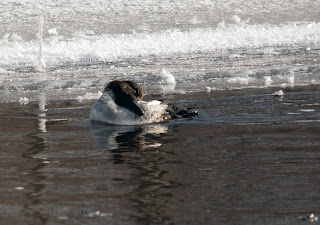 It was so cold I didn't know if much would be around. I saw something in the River, that didn't look like an ice flow. It turned out to be a Common Goldeneye duck, a female. They apparently stay right until the ice freeze up. She's OK here because the main channel never freezes. 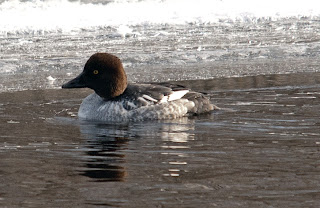 I got some shots and then she dove and was gone, which is apparently usual for these ducks. They're quite good at deep diving. Pretty isn't she. 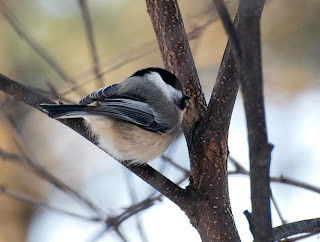 This Black-capped Chickadee finally settled so I could get some shots. 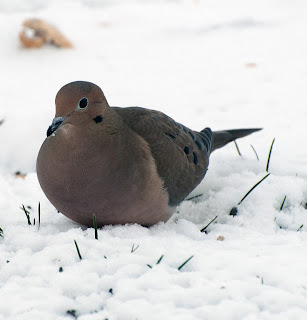 I thought Mourning Doves migrated. I'll have to check. 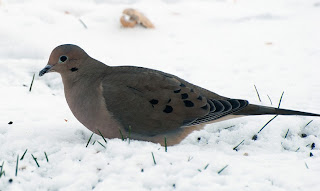 They're beautiful against the snow. 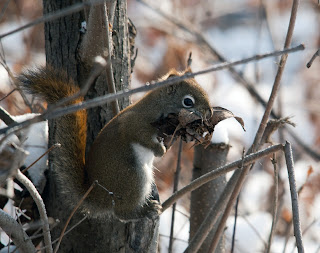 I put the Red Squirrel here just to fool Texwisgirl who thinks squirrels are my signature. This one appears to have something pretty good. 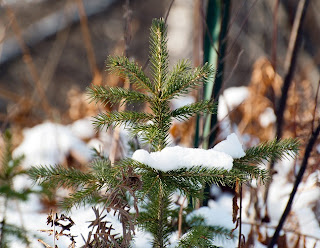 This is a junior size Christmas tree in the forest. And although early yet, Season's Greetings in case we forget. A post to Scenic Sunday @ http://scenicsunday.blogspot.com/ and MWT @ http://ourworldtuesdaymeme.blogspot.com/
Posted by Unknown at 8:49 AM