Ducks Of The Vermilon River. A Post to WBW.

Previous to this year ducks have been my "prey" birds. They preyed upon me by never giving me any opportunties to get any photos of them. It seemed to be going the same way this year after I got the Buffle-heads. The Vermilon reacting to a rainy spring flooded and away went the aquatic guys. It was not until I found ways into new wetlands that my world changed. Both the Buffle-heads and the Ring-necked ducks shown  below are real finds because the distribution map shows them to the north of me . Likely they're here because of the regenerated forest with its food sources. I think also contributing to my expanding wildlife lineup is knowing where to find them. What trails have what food and water sources and when. This is applicable to all the wildlife. As well, my forest savy is improving. For instance the other day I passed two sets of people with dogs who told me not much was around. I got shots of a river beaver, otters in a wetland,and a close up of a Ruffled Grouse. That doesn't mean Boom and I have turned into Grizzly Adams!! At least not yet. 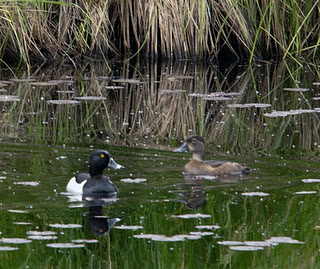 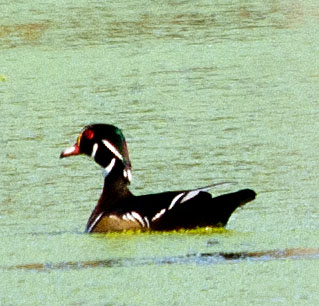 The Wood Ducks which are really colourful were mainly in the new wetlands. The trail is raised and runs in a circle so eventually you end up close to them, and the cat tails form a natural blind. Still they're not at all habituated and will take off at the least sound or movement. They're not at all urban pond ducks. 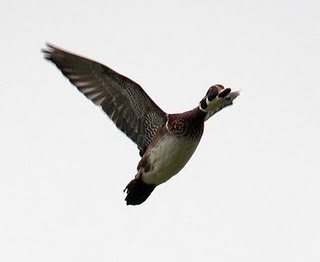 These are flights of Wood Ducks. 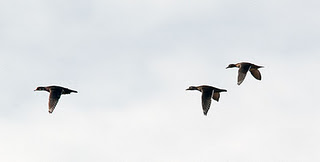 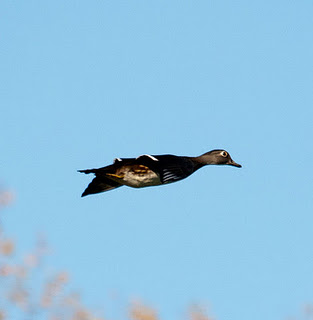 These two photos are female Wood Ducks, recognizable by the white eye liners.

The next two are Blue-winged Teals.The colour in their wing feathes is an incredible blue. You can see it most vividly in the third photo, as well as in the pair flying in tandem 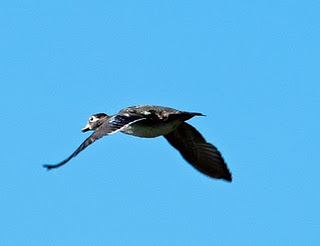 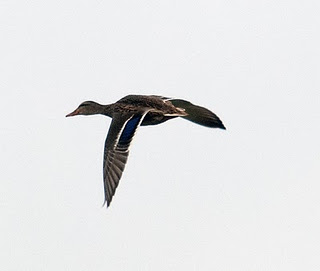 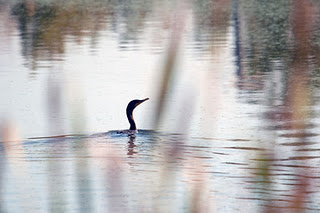 The Cormorants shouldn't be in with the ducks, but since they're another first for me, I've included them in the post. These compilations of types of birds gives me a record of what I've seen and learned to identify, although  mostly with the help of others. It means, I hope, that I don't have to learn it all over again. A Post to WBW @ http://pineriverreview.blogspot.com/ 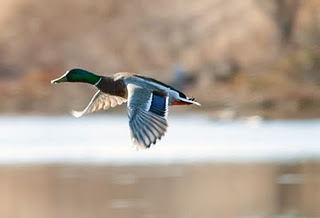 Strangely enough, these are the few shots that I have of Mallards, the most common of the ducks. They always seem to evade me. But it's quite a collection of ducks over all isn't it? 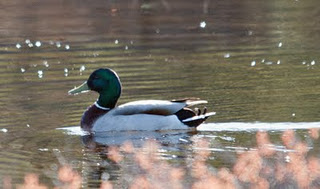 My last post was about my companion Boomer. Of course, he got rave reads, and comments. No, I'm not going to drop" me"from the blog title. One comment from Arija in Australia who said her husband had the most respect for the Malamute from his work in the Antarctic and the Artic. This comment reminded me of the story of Oscar, a Greenlander Husky, I expect another name for Malamutes. The story was written by a Norwegian/Australian transplant who was the dog trainer on the Early Australian Antarctic expeditions. Oscar was one of his best who fought his way to lead dog. The story has many comical, and brave instances, but Oscar was retired when mechanized equipment came into the Antarctic. The dog teams were reduced, and Oscar was retired honourably to a zoo in Australia where he spent his time receiving visitors. The Australians soon realized the error when equipment failed and there was no dog backup.  Oscar was quickly plucked from retirement, and sent to sire more dogs. Hmm, not a bad job. One night when Oscar realized, as only a dog can, that his grip on leadership was failing, he went out into the cold night and never returned. By now there is not a dry eye in the house of course, but think about it. Here I am recounting the story of Oscar who passed, but whose spirit I'm passing on. I can't even remember the name of the writer, but the dog is vivid in my mind. That's surely a lesson. Arija the story was carried in one of those compilation series like Reades' Digest. Maybe you or your husband can track it down.﻿