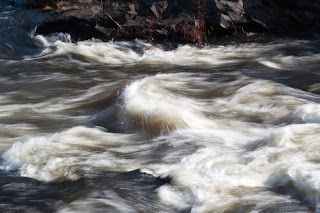 The weather has determined much of my hiking time, and it has certainly been strange. Snow at night followed by a warming to thick fog and rain. This meant hiking time was restricted to Friday and the Weekend. I normally don't hike the west side of the River on Weekends. There are just too many goofballs in motorized vehicles, some even hunting. At first I was disappointed with the hikes, but when I looked at the photos I was pleased. Opposite more of the rapids, mainly because white water is attractive, at least to me. 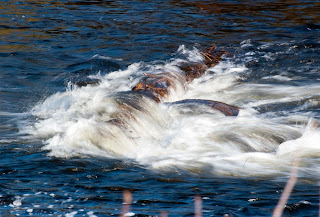 This log is likely the deadhead that I mistook for the beaver on an earlier post. It's wedged in the rocks and creating its own white water. 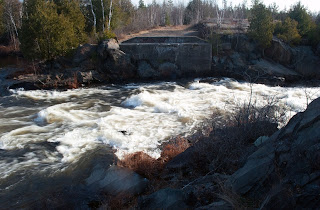 This is the abutment and the chute. The light variations are incredible, from bright white to dark shadows and a burst of sun at the top of the frame. 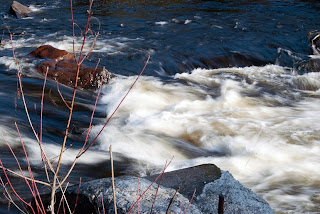 Similarly the sun is strong in this photo turning the water a bright blue, although it's a cold blue. Normally the water would appear dark. 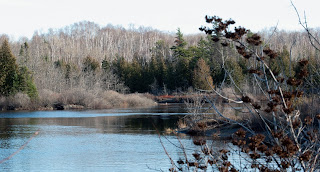 More fun with colours. There is a lack of colour here, except for the bright red splash on the opposite bank. They're blueberries dressed in fall red. This area is immediately above the rapids. Its bucolic look could give a false sense of security except for the noise. 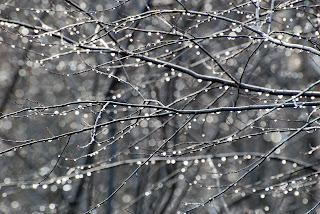 As I said cold in the morning. As I began the hike a little light turned the ice on these choke cherry or pin cherry trees into fairy lights. 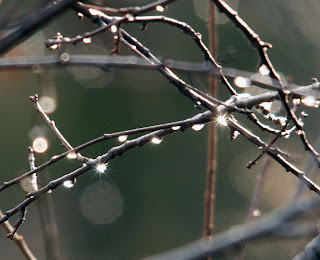 You can see the light prisms, but look at the two diamonds on the main branch in the close up 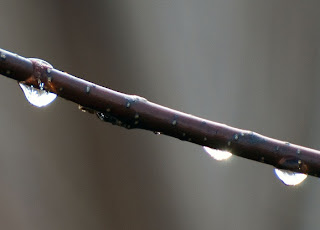 This close up, certainly not as arty, shows the size of the ice drips. 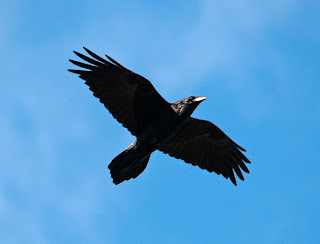 I don't know if this is a crow or raven because he's in flight. I suspect he's a raven because they hang out on the west side of the River. But look at that sky, all in the same two day period. 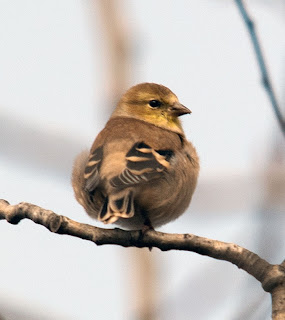 I haven't seen any goldfinch for a while. They overwinter here, but the male changes his plumage to less flamboyant colours, more similar to the female. 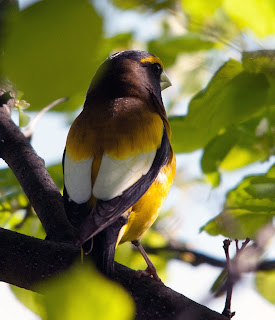 When I was transferring photos from memory cards to my new external hard drive, I ran across a series of shots of Evening Grosbeaks. This is a male and he was photographed in the spring as his beak is green. They change beaks from yellow to green, incredible isn't? 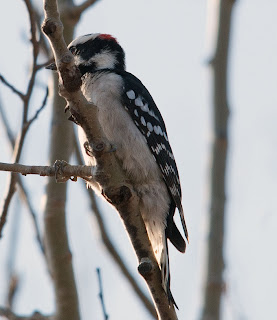 I never tire of woodpeckers, and this male Hairy is a prime example. 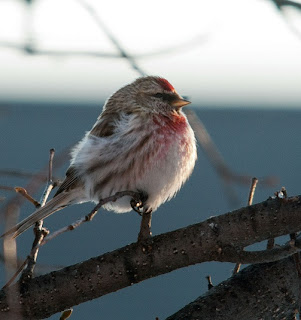 The Redpolls are here now. Both of these are males. 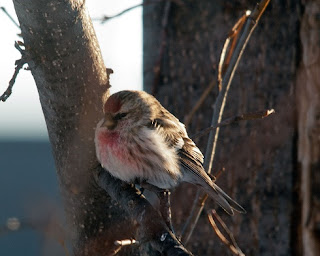 Of course some four legged critters are suitable for the signature. A long shot of an Otter, and of course, a red squirrel with his usual case of the "cutes". A Post to Scenic Sunday @ http://scenicsunday.blogspot.com/ and MWT @ http://ourworldtuesdaymeme.blogspot.com/ 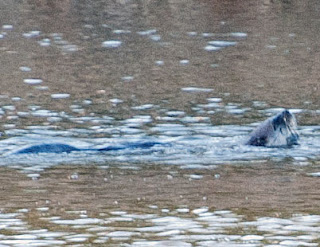 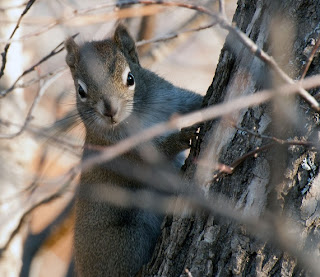