Vivid Colours Against A Grey Background At the Vermilon River. A Post to WBW. 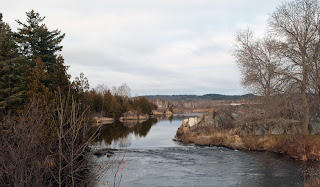 I included a few shots of what I call the upper River to show you the heavy grey of the the overcast weather. Boom & I are slaves of the weather, as I have no camera waterproofing gear. So if the weatherman says it's at all fair, we're gone. I think what he really meant was overcast with a hint of sun, if we're lucky. 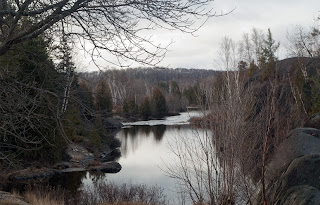 The first photo looks north and east, and is by far and away the brightest it gets. This grey plays havoc with the Sigma 150-500mm lens, which is a bright sunny day lens. 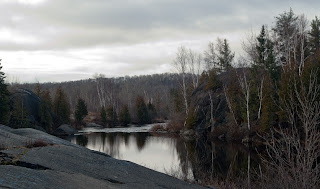 Again looking south and westerly. You understand, of course, that by upper river I just mean of our little wilderness patch, not the whole river which runs at least 200-300 miles north as the crow flies, and south by many names to Lake Huron. The rock outcroppings are the norm in the Canadian shied. 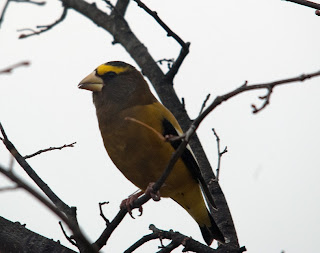 Making light of the grey skies, a flock of Evening Grosbeaks paid a visit to my feeders to eat Boom & I out of house and home. Opposite is the male, below the female. Evening Grosbeaks were first seen in the west and seen in the evening, and of course grosbeak refers to the the size of their beak. They spread east, and feed primarily on the spruce bud worm, so they are native to northern forests. 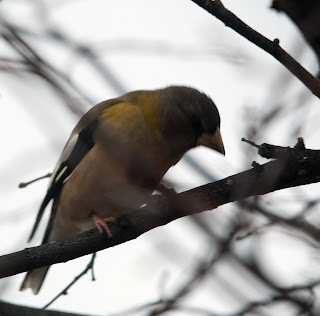 The female, although not as flamboyant as the male, is a beauty in her own right.

Against a grey background these birds are enough to make you feel good just from their colour. 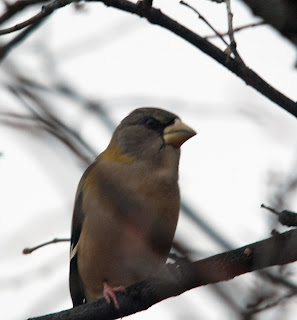 That's the point of today's post. Grey skies usually make people depressed, but when you're outside seeing these kinds of colour, it's just like a tonic. In all the photos the grosbeak's beak is yellow; it's in the spring that it changes to green 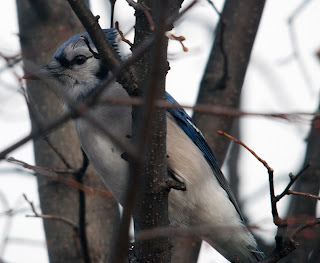 Blue Jays are just as resplendent as the Grosbeaks. 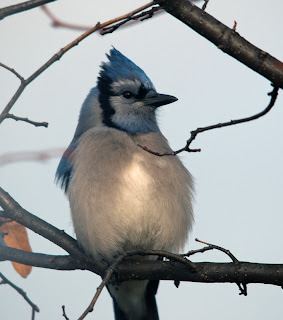 I caught this fellow with his comb up, which gives him an incredibly alert aura. 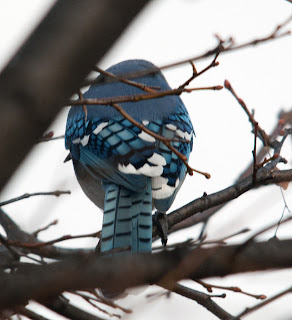 Even in the grey light the Blue Jay tail is quite the sight. These birds depend on natural light to make their feathers glow as the feathers refract the light,as is the case with most bluebirds. In bright sun light the tail will even blur the camera. 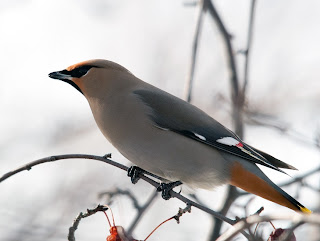 I had already posted some Bohemian Waxwing shots. These photos are from the same series of photos. There, as with the Blue Jay, is no difference between the male and female. 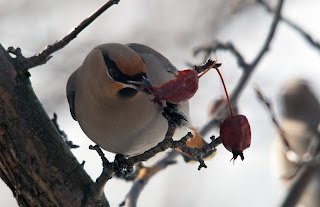 These birds along with their cousins the Cedar Waxwings are the penultimate berry eaters. Berries even play a role in their courtship rituals. We're fortunate here to have both the Cedar and the Bohemian Waxwings. 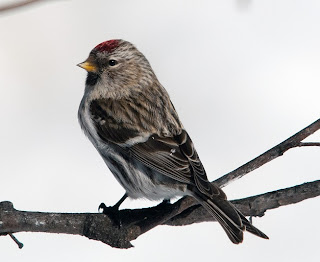 Redpolls are winter visitors also from the Boreal forest just north of us. They're about the size of a small sparrow, and move in large flocks. 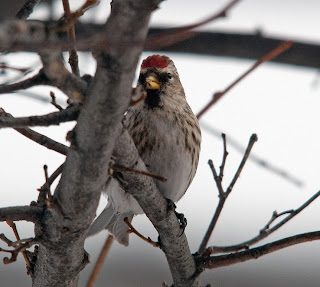 These photos are of a female. The male has red on his upper breast. Strange isn't it that such a small bird is so hardy, and able to survive in such a hostile environment. They'll leave when winter is over. 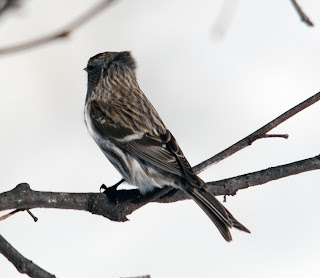 This little guy seems totally impervious to the wind. 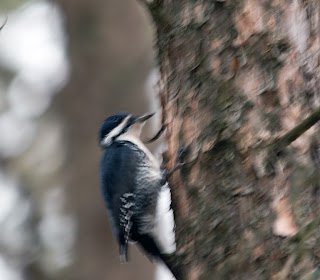 Here the grey totally worked against me. This is a first for me , a Black-backed Woodpecker of the three-toed variety. The species is rare because it inhabits burnt out forest, or forest that has an insect infestation. This little stretch of woods is filled with different birds and wildlife. It is a thick stand of coniferous trees on the river so it's dark, and damp. On top of that it's overcast and damp anyway. In fact damp enough to fog my camera lens. So nothing went right, and it's happened before in this area. But I know where he is and in fact saw several trees that must have an insect infestation that he's been at, so he'll be back. 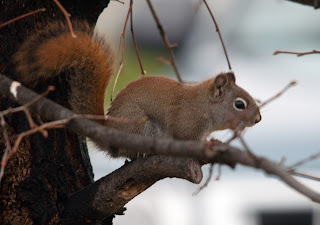 Well not quite a bird, but against the grey light, he's a bright addition.  My point was that nature creates such vivid colours against her  backgrounds whether it's grey, or the white of snow. How can you not be bright and happy in such an environment. A Post To WBW @ http://pineriverreview.blogspot.com/
Posted by Unknown at 7:11 AM